Yesterday, Santa stopped by our studio and told us 75 how he stays so jolly].  Today, we want to share a story about two of Santa’s helpers – you may or may not be familiar with it.

It all began 27 years ago. Larry Stewart was broke. He was also very hungry. He saw a little diner. He went in. He admits that he planned to order breakfast, and then when it was time to pay …. he planned to pretend that he’d lost his wallet.

The owner of the diner must have had a sixth sense. As Stewart had finished eating, the owner came out from behind the counter and bent down to pick something up from the floor. “Here,” he said to Stewart, “you must have dropped this.” It was a $20 bill!

Stewart made a vow that day. He would help others whenever he could. He did just that. He started immediately. When he had some spare money, he would find someone in need and share his good fortune.

As time passed, Stewart started and succeeded in his own business. But every year, at Christmas, you could see him looking for people who needed a lift. He would give them cash … asking only that they help someone else in return. He became known as “the secret Santa.”

That’s because he did all of this anonymously. We only learned his identity last Christmas, as he realized it would be his last – you see, he was losing his fight with cancer. We lost Larry Stewart in January. During his life, he managed to give away about $1.3 million as the secret Santa.

But his legacy isn’t over. As Stewart lay dying in his hospital bed, a fellow businessman and friend promised Stewart that the mission would be carried on – the businessman vowed to be the next secret Santa. This year, he has crossed the United States going to thrift stores, laundromats, bus stations, and the like handing out $100 bills – maybe one, maybe more – to people in need.

By Christmas, he will have given out $75,000 of his own money. He says he gets a great return – the joy that it creates for him and the people who receive his gift. They know that they’ve received an unconditional gift – based on nothing more than one human being caring for another.

Here’s the secret Santa in action. A couple lost one of their four children to a rare form of cancer in November. They faced incredible medical bills. They warned their remaining kids that Christmas might not come this year.

One day, they heard a knock on their door. Standing there was the secret Santa. He handed them $1,000!

We thought it appropriate today to quote the new secret Santa.

“Secret Santa lives in each and every one
of us, it’s just a matter of letting him out.”

The good news is that this idea is catching on. More and more people are contacting the new secret Santa. Even interning with him to see how he does it. You can see too in this special report from CBS.

Next time, we’ll discuss the timeless secret for overcoming all the odds … for making your star shine bright. 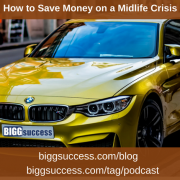 How to Save Money on a Midlife Crisis

The Dirty Truth About Being an Entrepreneur

Is Your Star Shining Bright?
Scroll to top