Do you ever feel overwhelmed by your to-do list?

Do you ever get down on yourself for not accomplishing what you set out to do?

Wouldn’t it be nice if there was an easier way to manage it all?

Here’s the good news – there is!

We call it bigg success in a week!

Take your long-term goals and break them down into manageable tasks.

Step 1 – Decide what you want to accomplish this week.
Take your long-term goal and set realistic goals for this week. And here’s a tip – whatever you come up with, cut it in half!

Let’s say you want to be healthier, maybe even lose some weight. That’s your long-term goal. To do that, you decide to exercise. You think you should exercise every day. Isn’t that what many experts recommend?

But life happens. Your goal isn’t met. You give up.

So cut it in half so you know you can reach it – plan to work out four times this week.

Step 2 – Break it into even smaller chunks.
You can break it into daily goals. We find that it’s even better to break it into chunks. Going back to the previous example, you plan to work out four times this week, so you need four chunks.

Your first chunk might be Monday and Tuesday. You will plan to work out one time between those two days. If you’re swamped on Monday, you still have Tuesday to get your work out in.

Step 3 – Build flexibility into your schedule.
You may front load your week so that you know you’ll have extra time at the end of the week to catch up.

Be sure to allow for some reactive time, as well. This is one thing with which people often struggle. You want to be as proactive as possible. But obviously, some jobs require more reaction than others – especially those where you work closely with customers.

So, if your job requires you to react to others about fifty percent of the time, don’t plan to get an eight-hour project done in one day. Schedule it over two days.

Step 4 – Start fresh each day.
Don’t beat yourself up for yesterday. You can still be a bigg success this week if you’ve followed the previous steps. Just go get it done today!

Step 5 – Reward yourself.
When you reach your goals by the end of the week, give yourself a little treat. You’ve earned it!

On the show, George discussed how he is using these principles with something simple – his e-mail. We get inundated with e-mails seven days a week here at Bigg Success. George said he is finally getting a handle on it. He said his goal is to have an empty Inbox at the end of each day.

To do that, he makes sure he empties out all his daily incoming e-mails. In addition, he has old e-mails that he needs to sort through. Every day, he empties out one additional day. He has built some flexibility into his schedule – he plans to do that three days a week, instead of five.

Every week, he’s three days closer to his goal. It’s just a matter of time before he reaches it!

Our Bigg Quote today is by Fitzhugh Dodson.

“First you write down your goal; your second job is to break down your
goal into a series of steps, beginning with steps which are absurdly easy.”

Follow this advice and you’ll turn your mountains into mole hills.

Next time, we ask what you get when you spell “desserts” backwards?

7 Steps To Sell Your House … Fast!

4 Keys to the Life of Your Dreams 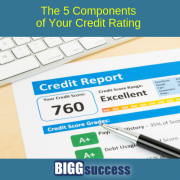 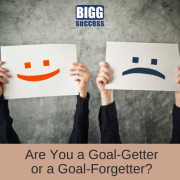 Are You a Goal-Getter or a Goal-Forgetter?

How To Be A Terrible Boss