So he did his report on being a bricklayer. His dad was a bricklayer, with his own business. When his teacher saw the title of his report, she said, “You mean with your brain, you’re going to be a bricklayer?”

George could have taken that comment as an insult about his dad. But his dad was good with his hands and his head. He said he did initially think that he wouldn’t get a good grade. But over time, her comment resonated with him. It helped him, as a young person, be more confident in his mental ability.

4 ways to get a message across
The statement and the delivery are both important parts of communicating a message. You can’t necessarily control what your message is, but you can control how you deliver it.

#1 – Negative statement, negative delivery
Without question, this is the worst way to communicate a message. If someone says something negative to you, in a negative way, they lose a lot. You’re not going to feel better. The relationship won’t be enhanced. You may get defensive or even angry.

"Speak when you are angry – and you'll make the best speech you'll ever regret.”
Dr. Laurence Peter

#2 – Negative statement, positive delivery
Sometimes the message isn’t positive, but we still need to get the message across. How you say it becomes incredibly important. A good example might be Donald Trump on The Apprentice. He’s said things like, “I love you; I think you’re a great guy, but you’re fired.”

Negative messages have to be delivered. However, you can choose to frame them in a positive way.

#3 – Positive statement, negative delivery
You risk diminishing the real message you’re trying to get across when you have negative overtures. George took away a positive from his teacher’s comment, but he could have just been insulted.

#4 – Positive statement, positive delivery
Obviously, this is how you want to frame as much of your communication as you possibly can. This draws people to you.

Pause before you respond. The conversation can go into a tailspin and be completely unproductive or you may be able to turn it around with the right response.

And we can be inspired, no matter what the message is or how it’s delivered. We have a friend who remembers being told that he was too small to make the high school football team. That “negative, negative” inspired him to go for it. Not only did he make the team, but he was a starter!

When A Co-Worker Bad Mouths You 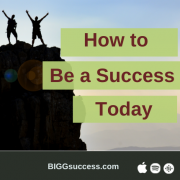 You Can Be a Success Today 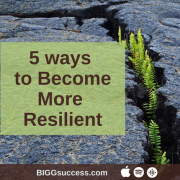 Help! I Need Somebody!

Ben Franklin Got It Wrong
Scroll to top