The University of Chicago is one of the most prestigious universities. Among other notable accomplishments, it is home to a large number of Nobel laureates, many who won their prize by advancing economic theory.

One of those theories is that there is no such thing as a free lunch. Everything has a price. Or does it?

There’s a story about a small restaurant near the campus of the University of Chicago. In the window was a sign that read, “Free lunch for Nobel Prize winners.”

So, it turns out, the same people that postulated that there is no free lunch were able to get a free lunch!

Now this story may be folklore. We couldn’t confirm it. If you know of this restaurant, we’d love to hear from you. But real or not, it still illustrates the point we’re about to make.

Is there such a thing as a free lunch?

If the story is true, one would be tempted to say that there is. After all, these Nobel Prize winners ate without any cost, right?

But it still cost the restaurant owner money for the ingredients that went into the lunch and to prepare and serve the food. So, while the Nobel laureates didn’t pay anything for the lunch, it still wasn’t free.

For a benefit. Having Nobel laureates frequent his restaurant, which made other people interested in eating at his restaurant. And it got people talking!

For a very small cost.

Is there something you can do that won’t cost you much, but will get people talking? Use a portion of your marketing budget to influence the influencers. Sure it costs you a little, but the benefits can be significant! 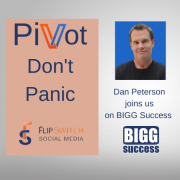 A Super Bowl Champ Lays it on the Line Part 3

You Can Be Debt Free with These 5 Steps