CNN Money recently asked forty people for the best advice they ever got about money. One of the people featured is Bill Nygren, the great manager of the Oakmark Select Fund.

He refers to an episode of the Johnny Carson show, where Johnny asked financial guru Andrew Tobias how someone with only $1,000 should invest it. Andrew Tobias said they should buy non-perishable items.

The crowd got quite a kick out of that answer!

Here was this great financial mind suggesting that people, with only a small amount of money, buy common, every day items instead of investing it.

We all face tradeoffs. One of those is saving money by spending time or vice versa. For example, we often eat out to save time. But eating out costs more money than buying the groceries and cooking for ourselves.

Of course, it’s not just about money. We do understand quality of life! We just had to throw this in here to let you know we are human!

Another trade-off we have to consider is now vs. later. If we spend money today, we won’t have it tomorrow. But instead of spending it today, we could invest it. If we do that, we’ll have more money tomorrow (the original money plus whatever we earn on our investment).

Every outlay is an investment

Taking the advice Tobias gave, if I can save enough on the non-perishables I buy, it may be worth it to buy them now so I don’t have to pay more tomorrow. It’s just like investing the money now to have a greater amount later.

Millionaires get this concept

In his great book, The Millionaire Mind, Thomas Stanley talks about how millionaires spend their money. Of course, they invest. But millionaires are also very frugal.  Some examples that Stanley points out are:

So you know you’re thinking like a millionaire when you’re looking at every dollar you spend as an investment. Are you getting the return you want?

Next time, we’ll talk about getting ahead by getting out. Until then, here’s to your bigg success! 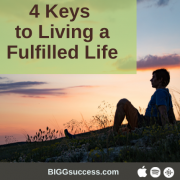 4 Keys to Living a Fulfilled Life

A Super Bowl Champ Lays it on the Line Part 2

Party in the Parking Lot!

Get Ahead by Getting Out
Scroll to top