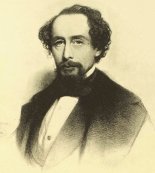 If you're like us, you love A Christmas Carol. We know Charles Dickens as a great writer. So we found it interesting to learn that he made more money with another endeavor.

As we verified the previous statement, we learned some intriguing tidbits about the man behind this great book. Today, we'll share the rags-to-riches-to-rags-to-riches story of the great Charles Dickens.

Dickens’ father was known to be generous to a fault. So much so, that he ended up in debtor’s prison – not just once, but twice. In fact, he would’ve been there a third time were it not for Dickens himself coming through with the needed cash.

The whole family followed him to the prison the first time – with the exception of twelve-year old Charles. He was forced to work in a shoe polish factory in deplorable conditions. Much of the inspiration for his writings came out of his experience as a child. (Source: Online-Literature)

Like Dickens, you have to pay your dues. You, too, can find a way to make your dues pay!

Dickens’ father inherited some money and was able to get out of prison. Unfortunately, for Dickens, his mom thought he should keep working at the factory while also attending school.

When his father experienced his second financial setback, Dickens was forced to leave school. He held a series of jobs, including work for a law firm as a court reporter. During this time, he published a sketch. It was so well-received that the publisher paid him handsomely to do his famous Pickwick Papers series.

By now, the son of a debtor prisoner was 23, rich and the most famous writer in all of England. (Source: November 24, 1860 issue of Harper’s Weekly via Victorian Web)

All of your experiences – good and bad – serve as your laboratory. What lessons have you learned? Like Dickens, you can turn misfortune into fortune!

Dickens lived the high life for abut eight years. Then, like his famous line from A Tale of Two Cities, he quickly saw his fortune fleeting.

His previous book, Martin Chuzzlewit, had not sold like his earlier works. On top of that, his wife was pregnant with their fifth child. Dickens needed money and he needed it fast!

So he sat down and cranked out a new book – A Christmas Carol – in a matter of weeks. He did it out of necessity, but it became one of his most famous works.

It still pervades our culture today. The phrase “Merry Christmas” became popular after this book.

The spirit of Christmas – as we know it today – was revived. Many of the traditions of Christmas we now hold dear – from family gatherings to seasonal food and drink – are the result of A Christmas Carol as told by Charles Dickens. (Source: Wikipedia)

What conditions in your life are pushing you to your great work? The worst of times may lead you to the best of times. Like Dickens, you may act out of necessity and create your legacy.

We know Dickens as a great writer who was incredibly successful commercially. But did you know that isn’t how he made most of his money?

No, Dickens was a true entrepreneur. He saw an opportunity and capitalized on it. Dickens made more money from public appearances than from his novels.

It’s true – a little over twenty years into his writing career, Dickens began doing public readings of his works. He had a passion for the theater and this gave him the opportunity to perform. He arranged for sponsors of each event and maintained a rigorous touring schedule. (Source: Listverse)

People are still willing to pay generously for unique experiences like the ones Dickens provided. So here’s a question for you …

What complementary product or service can you add to your current offerings? Play to your passions and discover your next best-seller!

We’ll close with a quote from Dickens himself: “I will honor Christmas in my heart, and try to keep it all the year.” We wish you and your loved ones a very Merry Christmas!

‘Tis the Season for Entrepreneurs

Why Many People Never Soar to BIGG Success
Scroll to top