It’s time for another installment of Tutors on TV. We caught a rerun of 3rd Rock from the Sun the other night. Dick Solomon (played by John Lithgow) was being bullied by a cashier.

She was charging him for crackers. Just him – no one else had to pay for them. Dick was tormented.

Mary Albright (Jane Curtain), his colleague and girlfriend, told him he needed to take a stand. She said:

“You’re giving her power. You have to take control.”

How could Dick take control? By not letting the cashier’s actions bother him.

That’s exactly what he did. And it worked!

To whom are you giving power? Take control!

BIGG success is life on your own terms. It’s about entrepreneuring your life – taking control to design and build the life that fits you perfectly.

You own your life! You’re the entrepreneur in charge of this most valuable enterprise – your life. Entrepreneurs focus on what they can control.

You can’t control other people. However, you are in full control of your response to them.

Like Dick, you may run into a bully now and then. Notice how Dick took control back – he accepted his lack of control over the cashier and focused on what he could control – his response.

He owned his response! You always own your response. Sometimes we delegate its management to others. You’ll never feel happiness letting others manage your response. Take control back!

Dick let the cashier rule. He answered to her. She pulled his strings like a puppeteer.

Mary helped him realize he needed to take control of his emotions. He cut the strings so she had no power over him.

A lot of decisions are never made. Doesn’t make sense, does it?

Yet it’s true. Dick didn’t actively decide to give the cashier control over him. But it didn’t just happen; he let it happen.

Own your decisions. Be present in the present moment so you can own your emotions and own your response. It leads to BIGG success! 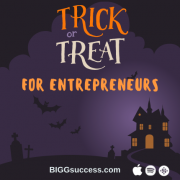 Keep Your Resolutions In Your Face

The People You Want to Lead
Scroll to top