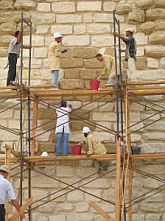 A while back, Jon Swanson had an excellent post about Philip the apostle. It helped us realize something we don’t talk about much here.

BIGG success is life on your own terms. We talk a lot about BIGG goal-getters. However, some people don’t have such lofty goals.

But we would be wrong.

You, and only you, get to define life on your own terms. It’s inherent in the definition! As long as you don’t sell yourself short, nobody but you should have anything to say about it.

We need them because they don’t expect so much. They get the job done without a lot of hoopla.

BIGG go-getters will follow if you lead right. You don’t need to pump them up; they are motivated for their own reasons.

However, now and then, they may need to understand why you’re doing something. They may need you to prove yourself from time to time. It’s okay – they’ll be diligently back to work just as soon as they’re satisfied.

So when you run into these mild-mannered, unassuming, practical people, be thankful. They will help you reach BIGG success.

Success in a Can

The Single Dumbest Thing a Start-Up Entrepreneur Can Say

This Word Helps You Keep Your Resolutions

The Key to Success in a Word