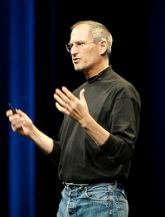 That’s how he described death in his commencement address to Stanford graduates in 2005.

His point, in his own words:
“Your time is limited, so don’t waste it living someone else’s life. Don’t be trapped by dogma, which is living with the results of other people’s thinking. Don’t let the noise of others’ opinions drown out your own inner voice, heart and intuition. They somehow already know what you truly want to become. Everything else is secondary.”

We didn’t know Steve Jobs personally. Yet he personally affected us. Such is the nature of real entrepreneurs.

They impact the lives of hundreds, or thousands, or even millions of people. Not as an individual, but through their business.

Steve Jobs was the epitome of an entrepreneur. Not just in business, but in his attitude about life.

You see that in one of our favorite quotes by the man we’ll never forget:
“Here’s to the crazy ones. The misfits. The rebels. The troublemakers. The round pegs in the square holes. The ones who see things differently. They’re not fond of rules. And they have no respect for the status quo. You can quote them, disagree with them, glorify or vilify them. About the only thing you can’t do is ignore them. Because they change things. They push the human race forward. And while some may see them as the crazy ones, we see genius. Because the people who are crazy enough to think they can change the world, are the ones who do….”

Here’s to you Steve Jobs! You will be missed!

Do You Set Your Goals Too High?

Out With The Old, In With The New Year

Will the Next Opportunity Bring Success?

The Secret of Entrepreneurial Leadership

Email: The Best Way to Grow Your Business

Leadership and the Science of Attraction
Scroll to top