Politicians on the right and the left, including Sarah Palin and Howard Dean. Numerous members of both houses of Congress. Governors. Cabinet members. Even a President, Zachary Taylor.

The founders of the Associated Press and the ACLU.

Even the famous poet and master storyteller, Henry Wadsworth Longfellow was part of his bloodline.

He is William Brewster. He served as the Elder of the church at Plymouth until they were able to get a pastor. As we get ready to celebrate Thanksgiving here in the United States, we found his story riveting.

BIGG success is life on your own terms. William Brewster is clearly an example of this mindset.

He lived nearly eighty years. In his time, he set out on a new course for living more than once. He did it twice.

He served William Davison, who was Queen Elizabeth’s Secretary of State. Brewster stood out.

Davison soon regarded him as his most trusted advisor. Brewster was in the loop on everything. Eventually, Brewster served as an Ambassador to the Low Countries. He received recognition for his work there.

But trouble was brewing. Brewster believed in a separation between Church and State. The bishops of the Church of England had persuaded the King that people like Brewster were religious outlaws.

The authorities did everything they could to silence Brewster and his people. Brewster was one of the people singled out to spend the most time in jail.

Brewster decided it was time to chart a new course for living. He was in his early 40s at the time.

His health had been wrecked by his time in prison. And he spent nearly all the money he had to get to Holland.

To make matters worse, his education and experience didn’t lend themselves to the work available in this new place. He couldn’t even speak the native language!

So he struggled to make ends meet in his early years. But he soon found his niche.

He discovered he had a knack for teaching English. Furthermore, there was a sizable, unserved market of people who wanted to learn English as a second language.

And they had the money to pay for this education. His niche primarily focused on the children of the dignitaries in Holland and surrounding countries.

But Brewster was an ambitious man. And he had a calling.

With a partner, he started a publishing firm. They printed books that were banned in England because they weren’t officially sanctioned by the Church.

Brewster was prosperous. Yet he hadn’t fulfilled his purpose – to lead his people from the tyranny of Church and State to complete freedom and independence.

He felt the need to chart a new course for living again.

At 53, Brewster, his wife, and two of his five children set sail across the Atlantic. Destination: New World.

They set sail on the Mayflower. The ship wasn’t large enough to accommodate his whole family. So they left their three oldest children with their minister.

The trip was brutal. Damp. Dark. And the storms.

One storm raged so wildly that the ship’s chief timber cracked. Even the sailors on the boat were scared the boat would be ripped apart. The storm eventually subsided and the crew was able to mend the beam.

Hope waned as day after day past. However, the sight of land created a jubilation he had rarely experienced.

The jubilation soon turned into a harsh realization. He was starting over.

Food was scarce. The elements were harsh. There were no buildings, no infrastructure, no nothing.

It was the ultimate startup. They had to create everything from scratch.

But the people pulled together to make it happen. And Brewster thrived once again.

He preached. He raised his children, all of whom eventually made it across the pond. And he had his own farm.

He charted a new course for living and helped create an entire nation from scratch. In this new nation, we are free to worship as they please.

William Brewster was a BIGG success!

Are you ready to chart a new course for living? Maybe we can help! 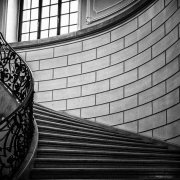 The Single Reason to Network All the Time