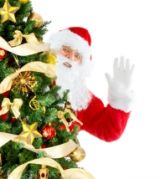 There’s another reason today’s show isn’t for the ears of kids.

We’re going to talk about Santa Claus.
So this is for adults only.

Listen to this post! Click a player to hear George & Mary-Lynn on The BIGG Success Show Podcast!

Kids have an advantage. They still believe in Santa Claus.

As we get older, and presumably wiser, we come to realize that Santa is a myth.

Jolly Old St. Nick is just a fable, weaved by parents for generations.

Santa is just a fictional character. Part of the land of make believe. A fairy tale. A figment of our imagination.

Imagination. Kids have it in abundance.

But then we mature. We become practical. We need proof. Logic prevails.

But Albert Einstein knew better. The man we associate with genius had this to say about imagination:

We simply can’t explain everything.
There isn’t a rational reasoning for everything.
To think you can is to miss part of the joy of living.
The unknown.
Embracing the things we can’t explain.
Accepting the miracles in everyday life.

“There are only two ways to live your life. One is as though nothing is a miracle. The other is as though everything is.”

And Santa Claus knows about miracles.

The miracle of jolliness

You can be miserable. Or you can be jolly. Either way, you’ll get more of the same.

Misery loves company. Santa knows that jolliness does too. It’s your choice.

The miracle of giving

Do you ever hear about Santa receiving? No, we hear about him giving. What does Santa know?

He knows that giving leads to miracles – from physical health to emotional well-being and more.

The miracle of Christmas

We won’t get into the original story of Christmas here. We’re talking about the miracle that Santa sees in people’s hearts this time of year.

People are friendlier. They show that they care more.

Imagine the miracles that would happen if we kept this spirit alive year round!

The miracle of you

You are the greatest miracle in the world. You may not feel like it some days. But you are.

What miracles do you see?

Weekends are for Wimps

How to Get Better Results When You Train Your Employees

How a Small Town Basketball Player is Winning in Hollywood

Don’t Wait Until the Cougars Get Hungry

The Greatest Success Books of All Time

Peace on Earth Begins with You
Scroll to top