We were traveling down a busy road in our area recently. It’s a two-way road with two lanes going in each direction.

A sign indicated there was “Road Work Ahead” – one lane on each side was shut down for about a mile. There was a worker with a “Slow” sign at the point where the lanes merged. There was another worker at the other end with the same sign, directing traffic in the opposite direction.

So here we were – driving through the construction zone. Suddenly the person in front of us stopped.

But why? We didn’t understand. However, we quickly discovered the reason.

He was looking at the worker holding the sign for traffic going the other way. On the back of the “Slow” sign was the word “Stop”.

So he stopped – even though the sign was not meant for him. The worker in frustration quickly waved him on.

Unfortunately, most people don’t get waved on so quickly and readily in life. So they just stop and they stay stopped.

It’s the single biggest reason people do not reach success – they are in a hurry to stop.

They stop when they’re not supposed to. They haven’t reached their destination, but they still stop.

They listen to other people who tell them to stop. They just don’t realize the advice isn’t for them or that the people they’re listening to don’t know what they’re talking about.

They stop because they think they’re being safe. In reality, they’re putting themselves and others at risk.

They stop because they run into obstacles. The problem is many of these blocks are self-created.

They hurry to stop.

BIGG goal-getters do the opposite. They hurry to go.

Someone said something discouraging or disparaging? Use it as fuel and go!

Go! To understand your environment better.

Go! To push past the obstacles. 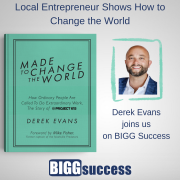 Local Entrepreneur Shows How to Change the World 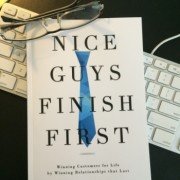 Is E-Mail Diluting Your Message?

5 Ways to Fail at Perfectionism