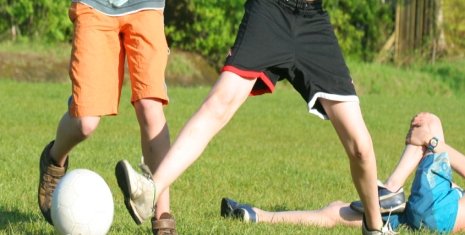 Getting banged up is a part of life as a kid! Hear George & Mary-Lynn share their stories on The BIGG Success Show Podcast (Duration 5:40)

We probably all have stories of getting banged up during recess: A fall from the monkey bars, a touch football game that got a little rough, or the sting of catching a line drive during kickball. But boo-boos come with growing up. Or at least they used to.

One school thinks recess can be dangerous, so they’ve banned footballs, baseballs, lacrosse balls, or anything that might hurt someone on school grounds. Oh, rough games of tag, or cartwheels are out too unless supervised by a coach – all to prevent injuries.

Some might argue the real injury the school is trying to prevent is one to the pocketbook via frivolous lawsuit. But we’ll go with the reason that they say which is they want to protect the kids from getting banged up. But are they protecting, or hindering?

Getting Banged Up to Overcome Fear

Think back to a game you played as a kid: baseball, football, soccer. In every case, you probably got hurt in some way.

[ML] I played 3rd base for a softball team, and took a hard grounder to the shin. It hurt and made me fearful of the ball coming at me. My coach pointed out that I hadn’t placed my glove correctly to stop the ball and worked with me to overcome that fear and become a better defensive infielder.

[GK] I made the winning catch during a football game right at the end of recess, but I had to dive to catch it head first into a fence. After I stood up to celebrate, one of my friends told me I was bleeding. I had a cut just above my eye and still have the scar today! But hey, sometimes it hurts to be a success.

Getting hurt can provide an opportunity to learn. If kids are “protected’ from this, they’ll only know the fear, therefore they won’t try.

Getting Banged Up Makes You Stronger Mentally

We live in a rough and tumble grown-up world filled with highs and lows, wins and losses, acceptance and rejection. It’s important to know who you are and what you want so you can keep your chin up.

Isn’t it amazing how those games played during recess as a child taught you things about yourself? What kind of role did you play on the team? How did you feel after a win or a loss? What strategies did you come up with for the next game? Who did you look up to, and why?

There’s a lot to learn from a good competitive game. When the game was on the line, and the quarterback threw a pass to you and you (unlike George) dropped it, how did you handle it? How did you get over it? These things happen. We all drop the ball from time to time in life.

We think you’d agree that it’s nice to have experienced this feeling as a child, and not for the first time as an adult!

The playground isn’t just a place for kids to run around and let loose. It’s also one of the first places where through games, and occasionally getting banged up, that they begin to learn important life lessons that lead to BIGG Success.

What did you learn on the playground as a kid? 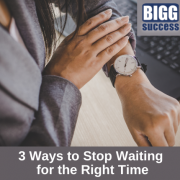 The Dirty Little Secret About Entrepreneuring

A Super Bowl Champ Lays it on the Line Part 1

Review: The Greatest Miracle In The World

The Link Between Entrepreneurship and Human Rights
Scroll to top