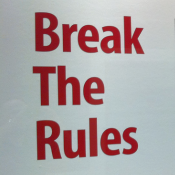 Break the Rules to Win is also on the BIGG Success Show Podcast. Click PLAY to listen to this post with George & Mary-Lynn.

Break the rules – that’s something we were never told to do as kids. In fact, if you broke the rules, you got punished. Maybe our parents were wrong – after all, according to studies, future entrepreneurs break rules and get in trouble in their teens.

As adults, we’re still encouraged to follow the rules, yet we’re constantly bombarded with stories about brilliant billionaires who achieved success because they were willing to break the rules:

Should You Break the Rules?

So what’s a rule-abiding person to do? Since BIGG Success is life on your own terms – make (and break) your own rules!

DISCLAIMER: Now when we say to make and break your own rules, we aren’t encouraging you to do anything criminal, or morally wrong. We are challenging you to examine the rules you follow, and make sure they aren’t really for someone else.

Unhappy with the job you have? Break the rules – don’t settle for it. Begin working towards a job that excites and empowers you.

Dissatisfied with the amount of money you make? Break the rules – don’t accept that your salary level won’t go up. Learn some negotiating skills, or find a way to make more money on the side with your unique skills.

Wishing you’d taken a class about a certain subject or field when you were in school? Break the rules – teach yourself. Online resources have never been so robust and inexpensive.

The truth is, in this fast-changing, competitive economy, the rules of success for careers and business are constantly evolving. The rules you make for yourself should be flexible too.

Celebrating Those Who Break the Rules

Speaking of rule-breakers, have you heard about the Rule Breaker Awards?

[ML] I’m honored to have produced, and provided the professional voice over for the audio commercial for these awards. (Listen to it here).

These awards honor business owners who forge their own path, ignore conventional wisdom, and believe rules are meant to be broken.
The Rule Breaker Awards are hosted by:

Rieva Lesonsky, who broke the rules by becoming the first female editorial director of a general business magazine.

Barry Moltz – a best-selling author, speaker and talk show host who broke the rules by never learning from his failures.

Mike Michalowicz – a best-selling author and multi-million dollar business owner who broke the rules by sneaking books into Barnes & Nobles to get a large contract.

Nominations are being accepted through March 31st, with some great prizes to be won from Nextiva, Constant Contact, Skype, Microsoft and more.

We’re always told to be humble, but go ahead and break the rules – toot your own horn and nominate yourself. It could lead to BIGG Success!

It appears we took this post to heart – as BIGG Success was a winner in the 2016 RuleBreaker Awards. Read more about how we broke the rules to win, and see a feature about the Rule Breaker winners on Small Business Trends.

The Agony of Defeat
Scroll to top