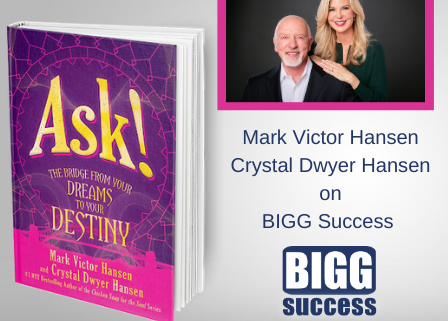 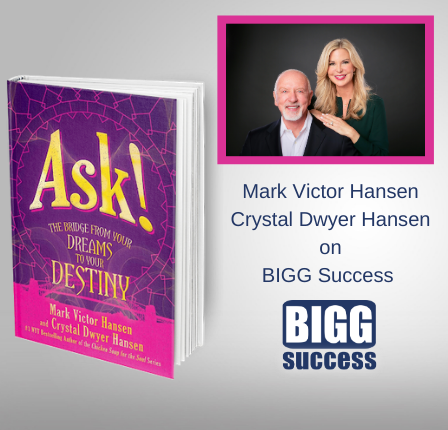 Mark Victor Hansen and Crystal Hansen say asking questions will pivot your life direction in amazing ways. Listen as they share how it worked for them.

Mark Victor Hansen is best known as the co-creator of Chicken Soup for the Soul*, one of the best-selling book franchises of all time.

Crystal Dwyer Hansen is an entrepreneur, coach, and author of Skinny Life: The Secret to Physical, Emotional and Spiritual Fitness*.

Together, they’ve written a new book, Ask! The Bridge From Your Dreams To Your Destiny*.

Here’s a summary of our discussion.

The Key to Finding Your Life Direction

Crystal says the difference between those who are really getting what they want in terms of success and happiness, and those who aren’t, is their willingness to ability to ask.

In looking back at their own journey’s, Mark and Crystal discovered there are 3 channels through which you can ask:

By interviewing other people and hearing their stories, the Hansen’s found that those who have success and happiness in life, happened to be really good askers.

When Your Life Direction Meets a Roadblock

At 19-years-old his dream was coming true as he got recruited in the NFL. But during a routine physical he was diagnosed with a condition that would cause him to permanently lose his eyesight. Jim’s dream ended and he was crushed. As his eyesight grew worse, he self-isolated in a nine-foot-by-twelve-foot room, in a room with a radio, a telephone and a television.

One day while in his room he turned on an old John Wayne movie and became frustrated that as a blind person, he couldn’t see the action anymore, only hear it. He brought this issue up during a support group for the blind and everyone else complained about the same experience. Jim exclaimed that someone ought to do something about that. The woman sitting next to him said “When are we going to do something about this?”

Jim and the woman in his support group, Kathy Harper, co-partnered in the creation of Narrative Television Network (NTN) – a network that would provide a verbal description of every single piece of action, small or large, so that a blind person could have a rich, enjoyable experience watching TV. That network has served 13 million blind and visually impaired people and their families.

Jim Stovall is also a writer, best known for his bestselling novel The Ultimate Gift*. In his endorsement for the book, Mark said, “I see this book becoming one of the great and inspiring movies of all time.” Jim says he’s endlessly thankful for Mark saying that because The Ultimate Gift – the movie*, was released in 2006 starring Drew Fuller, James Garner, Abigail Breslin.

Because he asked questions, Jim Stovall wrote books that couldn’t read, and made movies that he couldn’t see…and he made $100 million dollars doing that!

Do you feel doubt when making money decisions? Let the Financial Freedom Tool be your decision-making guide, twenty-four-seven, three-hundred-sixty-five days of the year. So you can make your next money moves with confidence and clarity. Learn more at FinancialFreedomTool.com.

Pivot Your Life Direction from Pitfalls and Setbacks

When you’re stuck, the best thing to do is just sit down and start asking questions.

In their research for the book, the Hansen’s found that when you start asking yourself questions, a different part of your brain goes to work for you. And it’s the part of your brain that does critical thinking. So often when we’re stuck, we get mired in our complaints.

To get out of the rut, take 15 minutes and ask yourself questions like, what’s going on right now? What do I need to do differently? Is there another opportunity for me? Why did this happen? Where am I going from here? How could I start today to make myself better?

How Crystal Pivoted from Food Stamps to Success Story

As a young divorced mother in the city with no way to support herself and her baby, she applied for food stamps. But the first time she stood in that grocery line, and I was ready to turn over those food stamps, she asked herself, “How did I get here? And the second question that just popped up right after that was, “Am I really doing the best I can or am I taking the easy way out?”

Those questions made her contemplate her future. She went home and asked herself more questions like, “How do I get a job tomorrow? How do I start working tomorrow?” That gave her the courage to sign up for multiple temporary service agencies. Through the variety of jobs she got to do, Crystal discovered she had a knack for business and sales. She decided to go to real estate school and get become a licensed Realtor

A year and a half later, Crystal was working for the top home builder in her area and became the number one realtor for that home builder.

In addition, people had always suggested that she do some modeling, so she hit up some modeling agencies and ended up getting signed.

Crystal went from food stamps to full benefits in a dramatic pivot!

She says when times are tough, you can feel a sense of helplessness or hopelessness. But when you start asking questions, it takes you to a new place. And ideas start to come and you start to challenge yourself. It is truly life changing no matter what part of life you’re at right now.

It will change your life if you just sit down and start asking those questions of yourself…asking God what your bigger destiny is? How do you fit into this big kingdom, this big universe? That really is a great feeling to know that you’re part of something bigger than yourself.

How Mark Pivoted from Bankruptcy to Millionaire

When Mark went bankrupt in 1974, he asked the question the book is teaching under Ask God. Mark said, “God, what is your destiny for me?” What came up – what he heard, was that he was supposed to be a professional speaker and writer. Mark says the first question he asked himself was, “Okay, can I really do this?”

His next question was to his roommates to see if they knew a person getting paid as a speaker. One of his roommates who was in real estate, mentioned that a motivational speaker was doing a session that morning for a group of local realtors. Mark went to see Chip Collins presentation and was mesmerized. He knew that helping people improve themselves and their performance was definitely going to be included in his destiny.

Mark then asked to take Chip out to lunch where he was able to ask questions and get insights about techniques and insights.

The rest is history as Mark has spoken to over 6,000 audiences worldwide and 5 million people and is the writer of the world’s biggest non-fiction book brand (Chicken Soup for the Soul), with over 500 million copies sold.

Mark says the questions he asked himself, God, and others allowed to pivot his life direction from bankruptcy to prosperity beyond his wildest dreams.

The Bridge from Your Dreams to Your Destiny

We’re told, “Ask and you shall receive,” so why do we lose our willingness to ask over time?

According to the book, there are 7 roadblocks to asking. One of the biggest ones is unworthiness – feeling like you aren’t good enough to achieve what you want. Another big one is fear – fear of rejection and not being accepted. These roadblocks cause us stay in place and wait for something to come to
us on its own.

The key to breaking the pattern is to always remember that if you don’t ask—the answer is already an automatic no. Resolve to be a “master asker” to make everything change for the better.

What an inspiring conversation that makes us think BIGGer! What questions are you asking yourself now? What pivot do you want for your life direction?

Be sure to get this great book Ask! The Bridge From Your Dreams To Your Destiny*.

Until next time, here’s to your BIGG success!

The Fine Line Between Living and Dying a Slow Death 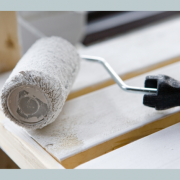