Speed isn’t everything, but learning to type faster is definitely an asset! Test how fast you type with this quick typing test  from CalculatorCat.

You’ll know in a hurry how many words you can type in a minute.

Before you go, here are some quick tips to type faster:

On the show, George said his dad was a perfectionist. Specifically, he was a bricklayer who was known for his impeccable craftsmanship. However, when he was working on other things, George said he would sometimes hear his dad say …

That’s a great saying to remember to help you fight your inner perfectionist. When you’re working on something, you reach a point of diminishing returns.

2 options
#1 – You can spend a whole bunch more time to get something a little bit better, or

#2 – You can spend the same time and get a whole bunch more done.

In most cases, you’re better off doing #1!

If what you’re working on is really important, go for the marginal improvement you’ll get from spending the extra time on it. If it’s not that important, get it done and remind yourself that it’s good enough for who it’s for.

For example, Mary-Lynn said that she used to try to get her hair to look just right before she went to work. But she has a lot of hair, so it took some time. She found that if she kept fussing with it, she’d be late for work. She learned to just turn off that curling iron, pull the plug and say, “It’s good enough for who it’s for.”

George said he only wished he had enough hair to have that problem!

George said that when he had a report to write in college, he would never be satisfied with the research he had done. The house had to be immaculate before he could start. His desk had to be cleaned and organized. He finally learned to say, “It’s good enough for who it’s for!” Then he could get start writing the report!

So, yes, we’re telling you to talk to yourself! But remember, you don’t need a perfect reply or a perfect question.

Our bigg quote today is a shortened version of a quote by John Updike:

“Perfectionism is the enemy of creation …”

So fight off your inner perfectionist with these simple words, “It’s good enough for who it’s for.”

Next time, we’ll discuss how to increase your profit year after year. Until then, here’s to your bigg success! 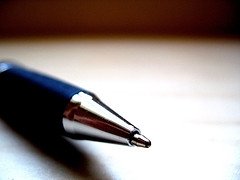 We move rapidly through our day. We shoot off a quick e-mail. txt msg a frend with abrve8d wrds. We may spell check our work, but we probably won’t read it. Do we check the grammar with our software program? Maybe. Proofread it? No way.

Writing is a lost art. Proofreading seems disdained. Great writers know that great writing is a process. They don’t expect a work of art on their first draft.

They write. They proofread. They edit. They repeat.

You communicate your message clearly when you write right. You build relationships. You advance your career!  Toward that end, here are five tips to write right!

#1 – Write to your audience.
Your audience loves seeing the word “you.” They feel like you are writing to them. They want you to include them. Give them what they want! Use the “you-view” when you write.

#2 – Keep it simple.
Journalists write to eighth-graders. Does that show you what they think of our mental abilities? They don’t do it because they don’t think we will understand it. They do it to make sure that they don’t make their material overly complicated.

#3 – Don’t be pretentious.
Don’t use too many multi-syllabic words. You won’t impress anyone if they don’t understand you. Speaking of that, get rid of all jargon. It interferes with your message. Use real words.

#4 – Don’t be redundant.
Length doesn’t matter. Resist the urge to “fill.” Make your point. Then quit.

#5 – Use your active voice.
Remember this phrase – actor action. Write your sentences with that phrase in mind. Which one of the following two sentences communicates better?

Michael played his guitar.
The guitar was played by Michael.

Many people write passively – like the second sentence. Yet you get the picture more clearly with the first sentence, don’t you?

Now you’re ready to proofread. Then edit. Repeat until you’re satisfied! Keep these five tips in mind on your next writing project.