Yesterday, we discussed how to build your self-confidence. Today we’ll talk about a recent study on monkeys and what you can learn from it.

Yale University recently released the results of a study on the behavior of some monkeys when given a choice of M&Ms. The researchers broke their experiment into the following four steps:

Step 1 – The researchers gave each monkey an assortment of M&Ms.

Step 3 – Then, Spanky was only shown the red and green M&Ms. Spanky chose the green one.

Step 4 – They showed Spanky the previously-rejected red  M&M and the blue M&M. Spanky chose blue; he rejected the red one again. In a disproportionate number of cases, the monkeys rejected the M&M they had discarded in Step 3. The researchers conclude that this reinforces the monkey’s previous decision. This, in spite of the fact, that he had no preference between the three initially. It turns out that monkeys rationalize their decisions!

Here are three things we take away from this:

Think about this as you’re making decisions today. Don’t let past decisions unreasonably cloud current choices. You may be factoring in a bias from your prior selections. You’ll make better decisions today, if you’re aware of this inclination.

For example, we have a friend who failed in business when he was younger. Now, even though he is extremely bright and has gained relevant experience, he won’t even consider going into business again. He (and his family and many friends) are letting his prior experience cloud his current judgment.

Time and energy are often wasted second-guessing ourselves. Take a lesson from the monkeys at Yale. Focus on what’s important now, not on what happened yesterday. Time is precious – spend it productively.

As humans, though, our decisions are often more complex than demonstrated by this study. What do you do when a past decision is affecting your life today?

If a decision from your past is haunting your present, change course. You may need to do some research; do it now – the sooner, the better. Do what’s necessary today to create your dream future.

Take someone who has racked up a huge credit card debt. He or she should stop using credit cards immediately, find ways to save money, and get a temporary, part-time job if necessary. Rationalizing will only make it worse. Do something about it now!

That’s what we can learn from this barrel of monkeys. Rationalize it if you can. Change it if you must. Either way, move on!

Our quote today is by pastor and speaker, Ralph Washington Sockman.

“Let us not bankrupt our todays by paying interest on the regrets of
yesterday and by borrowing in advance the troubles of tomorrow.”

Get past the monkey business of the past. Make today your day! Tomorrow, we’ll look at some tips for networking your way through the holiday season … and every season. Until then, here’s to your bigg success! 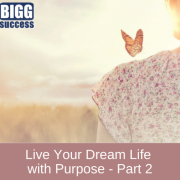 The Natural Way to Save Money

What to Do if You’re Not Happy with Your Job

Mingle Bells: Tips For Networking At Your Holiday Party
Scroll to top