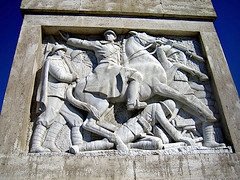 As a leader, you’re constantly being watched. Your people want to know if you’re genuine. Great leaders don’t tell their troops how to act. They show them!

They know that “do as I say, not as I do” doesn’t work. Your people will use any inconsistencies in your behavior as justification for their own behavior. So you have to set the example.

Here are five things you must do to lead by example:

#1 – Play by the rules.
You have 314 established a code of conduct]. Now you must play by it, too. If you don’t, neither will your troops. Your ground rules have to be seen as more important than any person. No one, including you, is above your code. It is your covenant with your people.

#2 – Show your commitment to the cause.
Show your troops that you are committed to obtaining 270 the victory you’ve defined]. Remind your people frequently of your desired destination as well as the progress that’s been made toward that goal.

#3 – Don’t ask your troops to do anything you wouldn’t do yourself.
Show your troops that you will do whatever it takes to succeed. If you’re not willing to do something, you shouldn’t expect them to do it. You lead by example by rolling your sleeves up and getting your hands dirty if that’s what it takes.

Review: Fire Them Up

Are You a Born Leader or a Born Boss?

Keep Your Troops Focused on Victory

Make It a Double

Danger: 10 Warning Signs of Trouble Ahead for Your Business
Scroll to top