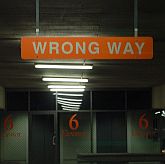 If you were a fan of Seinfeld, like we were, you remember that – for most of the series – George Costanza (played by Jason Alexander) was down on his luck. He was unemployed, living in his parent’s home with no hopes for romance.

Then one day, as he is talking to Jerry (Jerry Seinfeld), he notes that his life is the exact opposite of what he wants it to be. Jerry convinces him to do something bold: every time George’s instincts tell him to do something, he should do the opposite.

He starts by ordering chicken salad on untoasted rye and a cup of tea instead of tuna on toast with a cup of coffee. When Elaine (Julia Louis-Dreyfus) tells him a beautiful woman just looked his way, he doesn’t sit in the booth and say nothing. No, that’s what he would normally do. He goes over to her and says: “My name is George. I’m unemployed and I live with my parents.”

She’s astounded at his honesty as well as the fact that they both ordered the same lunch. They go out on a date where George continues to impress her by being the opposite of every man she’s ever known.

It turns out that her uncle works for the New York Yankees. George gets an interview and does the opposite of what he would normally. He lands the job of his dreams, the longest lasting one he ever holds.

Be like George
While George’s method was rather extreme, it highlights an interesting strategy to keep our resolutions. We don’t make resolutions for things about which we’re happy.  Like George, we got where we are somehow.

So, when you’re tempted to go back on a resolution, think like George Costanza! Not the down and out George, the opposite George.

Instead of going for that sweet treat, think like George. Have a piece of fruit.

When you’re debating whether or not to exercise today, remember George. Get up and go.

If you hesitate to reach out to that person with whom you want to connect, remind yourself of George. Call them now.

Instead of putting off something you know you should do, be like George. Do it immediately.

Think like George. Do the opposite. It just may lead to BIGG success!

Is This Why Mac Users are So Verbose?
Scroll to top