We’ve heard reports that holiday sales were down this year. The good news is that fewer people went into debt to buy presents, preferring to pay with cash instead.

That creates an opportunity.

The old idea of “layaway” was used more this year than it had been for some time. K-Mart even built an ad campaign around it. It’s not as easy for retailers to administer as buy now, pay later programs – like when you use your credit card – but in today’s economy they’re just happy to make any sale.

Another old idea is also seeing newfound interest – the Christmas Club. Your parents may have done it; your grandparents almost certainly did.

The Christmas Clubs of old didn’t pay a lot of interest and they carried restrictive rules about early withdrawal. Good for those not disciplined enough to leave it alone. Not desirable should a true emergency arise.

Assume that you plan to spend $2,000 next year for Christmas presents. Right now, you could find a Money Market Account that pays around 2 percent, according to bankrate.com.

If you were to invest $220 every month, starting in January, you would have your $2,000 by the end of September. Get ready to shop in October, with cash in hand!

You won’t earn much interest because rates are so low right now. But look at it this way – you won’t be paying interest on next year’s Christmas presents either!

A Christmas Club Account is just a fund dedicated for a specific purpose. You can extend this concept beyond Christmas. What if you …

You can do this for any, and every, major obligation or opportunity you have. And here’s the kicker …

For major expenses that are several years away, you can set money aside in an account that may pay higher interest.

Generally speaking, the longer you can wait to get your money back, the higher the rate of interest you’ll earn. For example, if you’re funding a car purchase three years away, you may be able to put money in a 3-year CD.

The key is to match your investment time frame to when you will need the money for the obligation or opportunity.

Of course, if you have outstanding debt, especially credit card debt, you’ll probably want to pay that off before you start funding other obligations – even if that means postponing, or cutting back, on discretionary expenses like a vacation.

We got used to easy credit – buy now and pay later with interest. We suggest paying now and earning some interest so when you buy later you’re money ahead!

Thanks so much for reading our post today. Join us next time when we ask three questions that lead to a brighter future. Until then, here’s to your bigg success!

Bigg Challenge
Leah just graduated from college. She has applied for several credit cards and been turned down because she doesn’t have any credit history. She says she’s never borrowed before or even had a credit card. Her bigg challenge: How can she establish credit?

#1 – Get a bank loan.
This will cost you a little but it will be worth it so you’ll have access to money when you need it. Here’s a way to definitely get a loan:

Deposit $1,000 into an account (e.g. a Certificate of Deposit, commonly known as a CD) for a fixed period of time (e,g. 3 months). Ask that same bank for a $1,000 loan to be paid back at the end of the three months. They may require you to pay the interest monthly, or they may not.

Your loan is 100% secured by the CD, so the only risk the bank has is that you won’t pay the interest. You’ll earn interest on the CD, but not as much as you’ll pay on the loan, so you’ll be out-of-pocket a little bit of money.

But you’re establishing credit. At the end of the three months, pay back the $1,000. Now, up the ante. Do the same thing all over again with say $2,000. Then again … each time increasing the amount. Over the course of the year, you may do this four times.

Keep the amount relatively small because you don’t want to needlessly pay interest. You’re establishing that you can pay back a loan of $1,000, $2,000 or whatever the highest amount is that you borrow. Just make sure you make every payment on time.

#2 – Have a savings account, not just a checking account.
You’ll look more favorable to certain companies if you also have a savings account. Don’t think you have to stuff it full of money. It just seems to make a difference that you actually have one.

Thanks, Leah for sending us your bigg challenge.

“Remember that credit is money.”

So establish your credit and score!

Next time, we’ll discuss why work life balance doesn’t work. Until then, here’s to your bigg success! 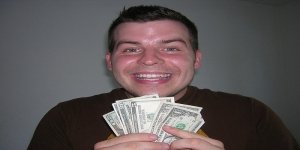 Bigg Challenge
We received an e-mail from Diane, one of our newsletter subscribers. Diane says her husband has a passion for electronics and their credit card debt just keeps rising. She wants to know how to confront him and get their family finances back in order.

Bigg Advice – 4 tips to stop the bleeding without getting bloody

#1 – Plan for a conversation, not a confrontation.
You want to solve the problem, not have an argument. So use the word “we” frequently and “you” infrequently. Now that may be tough when you’re not the spender. If it’s easier, talk about the “situation”, so you remove yourself, too.

#2 – Make it an event.
Gather up any needed information and go out for cup of coffee or a very inexpensive dinner. This signals that you’re not planning on arguing, so your husband’s defenses will be lower. Find a place that’s private and doesn’t have a lot of background noise, so you can hear each other.

#3 – Agree to this rule, “Pay today or say no way.”
Repeat this rule out loud to each other, over and over again. This is where you have to start. Stop the future bleeding today so you can focus on the problems from the past tomorrow.

Saying it is one easy, doing it is hard. If your situation is really extreme, put yourselves on a cash allowance and agree what expenses that covers. If it’s less extreme, you can use debit cards that draw on separate accounts – one for you, one for your husband.

#4 – Create a fun account.
Set aside an agreed percentage of your incomes into this account. IF, and only IF,   you’re able to pay all of your other bills in full, THEN you get to spend this fun money.

So if you’ve met your goals, your husband gets bonus money for the gadgets he wants. By the way, you’ll get bonus money, too. This is how you get his “buy-in” and keep him from going into withdrawal, which is crucial because you can’t do it alone.

Don’t think you have to be debt-free to trigger any bonus money. You just have to see a reasonable level of progress. Sometimes a small investment in rewards pays bigg dividends.

For example, you may agree that when you’ve reduced your debt by 25 percent, you’ll draw down 10 percent of your fun account.

As you get your financial house in order, check out our article on 206 the five piggy banks]. This will help you keep it in order.

Thanks, Diane for sharing your bigg challenge. We wish you bigg success!

We don’t know who originally came up with our bigg quote today, but we sure like it!

“Between work and family, I’m really not spending
enough quality time with my money.”

So give yourself time to get to know your money so it can get to work for you!

Next time, since it’s leap year, we’ll look at leaping from place to place. You can see the world while you work! Until then, here’s to your bigg success!