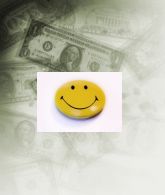 Money can’t buy happiness. We’ve heard it over and over.

Mostly from people who don’t have money!

First, research has shown that when money buys basic needs which weren’t being met before, there is a huge spike in happiness.

Beyond that, however, spending money leads to only momentary increases in happiness. The happiness is gone before the newness wears off.

However, the second reason is more compelling.

Elizabeth Dunn is a social psychologist at the University of British Columbia. Her research focuses on why people inaccurately predict their future well-being.

For example, in one study, she asked people whether they would be happier spending $5 to $20 on themselves or on others. The majority said they would rather spend it on themselves.

She then gave a second group envelopes stuffed with either $5 or $20. Half were told to spend the money on themselves. The other half were instructed to buy a gift for someone or donate it.

The people who gave it away were happier than those who spent it on themselves!

She followed this study with two more – one that looked at what people did with a bonus and another that looked at giving as a percentage of income. . She found that happiness was driven more by the amount given than the amount received.

She said that “if [giving] becomes a way of living, then it could make a lasting difference.”

As we enjoy this “most wonderful time of the year,” this study serves as a reminder that the spirit of giving should be with us all year.

Money can buy happiness when you give it away.

Giving sends a signal to your brain. It says that you have more than enough. It creates a sense of abundance. And it leads to many happy returns. That’s BIGG success!