Here we are in a New Year with many of us clinging tight to our New Year’s resolutions. We found a poem by Herbert Kaufman that is perfect for this time of year:

You are the man who used to boast
That you’d achieve the uttermost,
Some day.

You are the man who used to boast
That you’d achieve the uttermost,
Some day.

You merely wished a show,
To demonstrate how much you know
And prove the distance you can go …

Another year we’ve just passed through.
What new ideas came to you?
How many big things did you do?

Time … left twelve fresh months in your care
How many of them did you share
With opportunity and dare
Again where you so often missed?

We do not find you on the list of Makers Good.
Explain the fact!
Ah no, ‘twas not the chance you lacked!
As usual – you failed to act!

A putdown or a kick in the seat?

It sounds kind of negative doesn’t it? We shouldn’t see it that way. We should view it as a kick in the seat. If you feel like you missed out on some opportunities this year, ask yourself why. Is it because you failed to act?

We all begin each year with a precious inventory of time. It’s up to us to make the most of it before it’s gone. Many people set New Year’s resolutions. Most soon forget them.

Bigg goal-getters understand that setting bigg goals for yourself isn’t good enough. It’s may be only one percent of being able to live the life you want. You have to take action!

We have a friend who has a great method to make sure he keeps his resolutions top-of-mind. He writes three or four goals for the upcoming year on a small card.

He laminates three copies of that card. He tapes one on his bathroom mirror so he sees his list every morning when he’s shaving. He puts another on the rear-view mirror in his car so he remains conscious of his goals while he’s driving around. He keeps the third copy in his billfold so he says it every time he pulls out his wallet.

Please note: Just like your insurance broker, we’re not advising you to place a copy on your rear-view mirror.

But it’s what our friend does, so we felt obligated to report it to you!

He told us that he almost always reached the goals he has on this laminated. Every year, he has other goals but he said he almost never reaches them. Keeping these goals in his face helps keep them top-of-mind which helps him keep these resolutions.

We all have many things that demand our attention. It’s easy for our goals to fall by the wayside. The secret is …

Keep a short list of goals,
put them in writing, and
keep them in your face!

Thanks so much for stopping by to read our post. Join us next time when we’ll look at the one word that makes a bigg difference in keeping your New Year’s resolutions. Until then, here’s to your bigg success! 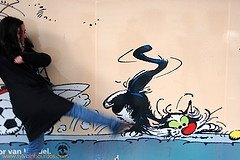 The master motivator, author, and speaker Zig Ziglar came up with this wonderful analogy years ago. Here is our paraphrased version of his great work.

Mr. B was the top dog in a very large company. Every morning, he met some of his cronies for breakfast. On this particular morning, he lost track of time. He looked at his watch and realized he was going to be late for work.

He left the restaurant and jumped in his car. He barely had the engine started when he threw it in reverse to back out. He burned rubber leaving the parking lot. As he got on the freeway he put the gas to the fiberglass.

As he sped down the highway, he looked in his rear view mirror. His heart skipped a beat when he saw the flashing lights. He pulled over and rolled down his window.

“Where are you going in such a hurry,” the officer asked.

“I didn’t say I was … but shouldn’t you be chasing real criminals and leave me alone?”

“I’ll leave you alone in a few minutes. Let me see your driver’s license, registration, and proof of insurance.”

Mr. B handed him the requested information. Then he sat there and stewed. As the minutes passed by, he got more and more angry.

The officer came back and handed him a ticket, along with the rest of his documents. He grabbed them out of the officer’s hand, rolled up his window, and took off down the road.

He finally arrived at work. He was really late now. When he got to work, the first person he saw was his sales manager.

“Good morning, Mr. B” said the sales manager with a smile.

“There’s nothing good about it,” barked Mr. B, “I want to see you in my office NOW!”

The sales manager followed him into his office.

As Mr. B threw his coat down on the couch, he yelled at the sales manager, “You fell short of your goal last week for the second week in a row. I want to know what you’re going to do to get back on track and I want to know now.”

“Mr. B,” the sales manager objected, “We just talked about this yesterday. We have four big deals. Any one of them will put us over the top and I’m sure we’ll get at least one of them.”

“I’ll believe it when I see it,” Mr. B blurted out while looking at some papers on his desk. “You’re dismissed.”

And so it went for the rest of the day.

Eventually the receptionist got yelled at. When she got home, the first person she saw was her twelve-year old boy. She yelled at him and sent him to his room.

On the way to his room, the family cat walked in front of him. He kicked the cat!

So here’s the question –
Wouldn’t it have been much better, for everyone involved, if Mr. B had just gone directly to the receptionist’s house and kicked her cat himself?

And here’s an even more important question –
Whose cat are you kicking?