A lot of us are very uncomfortable talking about money, whether that means negotiating your salary, asking for a sale, or asking for a loan. So the thought of going to the bank to get a loan can be very intimidating.

The loan process seems somewhat mysterious. Wouldn’t it by nice to know where bankers are coming from? Then you would be better positioned to get the money you need.

3 things to understand about your banker

#1 – Banks can’t afford to lose money.
A lot of people don’t realize that banks operate on relatively thin profit margins. So, contrary to popular belief, they don’t make that much money on every loan.

Will we get paid back?

#2 – Banks don’t fund start-ups.
This is perhaps one of the biggest misperceptions in the business world. People think the bank is the best place to go for money they need to start a business.

To which we say, reread our first point! Bankers are relatively risk averse for the reasons stated above and more. So banks don’t tend to lend money to new, unproven firms.

You might be saying, “But I know people who got money to start their business from a bank.” Here’s the distinction – the bank wasn’t loaning money to their BUSINESS; they loaned them money as individuals FOR their business. If you look deeper, you’ll find that, in almost every case, they secured the loan with equity in their house or some other asset.

#3 – Banks need to lend money.
That’s their business. So if you need money, and you can prove that you can pay it back, and you have some assets to secure the loan, go to the bank with confidence!

Our bigg quote today is by the great Stephen Covey:

“Seek first to understand, then to be understood.”

Understand your banker’s needs so you stand to get your money needs.

Next time, we’ll discuss how to offer criticism without being critical. Until then, here’s to your bigg success!

How the Rich Make Money 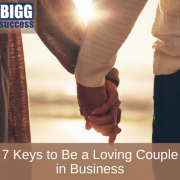 7 Keys to Be a Loving Couple in Business

Looking Over a Four-Leaf Clover

3 Keys to Balancing Work and Life
Scroll to top