It’s the day after Christmas. Here in the United States, that means the customer service lines are long as people return their gifts. In other parts of the world – Australia, Britain, Canada, and New Zealand – it’s Boxing Day.

If you’re not familiar with it, you might suspect that there’s fist-a-cuffs over gift exchanges! But Boxing Day is a tradition of giving gifts to people who are less fortunate.

We don’t want to leave the impression that we think us Yanks are Scrooges. A lot of people here are very generous throughout the holiday season. But we think Boxing Day is an interesting tradition, truly in tune with the spirit of this time of the year.

The son who learned to give

We found a great story about a mom who taught her son about the value of giving. We’ll hit the highlights here. It’s written from the son’s point-of-view.

The first Christmas that he remembers, he was thoroughly excited about all of his gifts. His mom soon squashed his enthusiasm; she told him he had to choose one present to give away to a little kid who wasn’t as lucky as he was. It was a hard decision, but he finally chose a present to give away.

Another Christmas, he really had trouble deciding between his gifts before finally settling on his new checker set. His mom left the room, only to return a short time later with a piece of cardboard, crayons, and his bottle cap collection. They proceeded to make a checker set by hand.

The author remembers one year, when his mom had been laid off, that he didn’t get many gifts. She told him that he didn’t have to give any presents away that year. But he decided he still wanted to observe the tradition. That year, he gave away his new football. Six months later, he asked his mom what she wanted for her birthday. Being a wonderful mom, she requested a football!

The son continued this tradition of giving away one of his presents every year, even as an adult. He ended up passing it on to his own son.

A reserve to give

This boy’s mom made it clear to him that they gave something every year to what she called “poor people.” He says that, years later, he realized they were poor themselves. Isn’t it interesting – to some extent, poor is a state of mind. If we have enough in reserve that we can afford to give something away, we must not be poor.

Give away the good stuff

Picture yourself as a kid. Do you remember being excited by just about every single gift? What if your mom would have told you that you had to give one of them away? That would have been pretty hard, huh?

We often give what we don’t want any longer or we buy something new just for the purpose of giving it away. We don’t have an attachment to it. It seems to us that giving away something you just received would really pack a punch – even for an adult, but especially for a kid.

The gift of time

Then there’s the checker set. After much debate, he decided to give that away, but his mom gave him a different option. He learned that material possessions are valuable, but the gift of our time is even more valuable. The checker set he gave away was one-of-a-kind and probably worth more than the mass-produced one he kept.

Giving when it hurts

We thought it was touching that, in the bad year when his mom said he didn’t have to give anything away, he still chose to give up his football. It showed how much he had learned from his mom.

She taught him another lesson when she asked for a football for her birthday. Sometimes when you give, it comes back to you, even when it’s unexpected.

He passed on this tradition of passing on gifts to his own son. Of all the Christmas traditions we could pass on to our kids, what could be better than establishing a tradition of giving?

Steer Your Way to Bigg Success

Why Your Partner Must be Two Faced

Is the American Dream Un-American?

How to Know if You’re Persistent or Stubborn 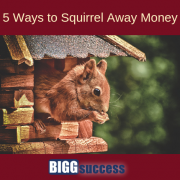 5 Ways to Squirrel Away Money