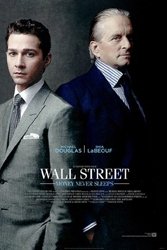 Over the weekend, we went to see
Wall Street: Money Never Sleeps. It was
our homework assignment from 'Q and Na'
so we could be guests on their great show, Entertainment for the Rest of Us.

BIGG success is life on your own terms. One term that was used over and over again in this movie is “moral hazard”. A moral hazard exists when an agent has tremendous upside even though he or she has no downside. Or as a friend of ours says: “Perverse incentives create perverse results.”

One way to create wealth is with other people’s money (OPM). Wall Street is all about OPM. A hedge fund manager may make hundreds of millions of dollars in a single year if all goes well. If it doesn’t, the investors lose and the manager goes unscathed.

The movie alludes to commercial bankers seeing these large amounts of money being made. And they wanted to get some of it for themselves.

The problem is that they play with FDIC money – which ultimately means taxpayers are on the hook.

Sound familiar? The banks didn’t go under, but only because we bailed them out. In our opinion, two problems occurred simultaneously to create this moral hazard:

1. Not enough regulation
In 1970, for the first time, investment banks were able to go public. When that happened, principals became agents. Investment banks take huge risks for huge payoffs. Once they were public entities, the shareholders had all the downside in the worst case while the managers shared a large piece of the upside in the best case. Why not leverage up?

2. Regulators didn’t regulate
The regulators at the Office of Federal Housing Enterprise Oversight – now dissolved into another agency – didn’t spot the problems with Fannie Mae and Freddie Mac. Yet Fannie and Freddie were the only two agencies for which OFHEO was responsible!

Of course, we’ve all heard the story of SEC employees and what they were doing with their time.

Now Congress has passed financial reform [pdf]. It did some good things. However, it assumes regulators will know when a bank that is too big to fail is about to fail. And that they will be able to act to prevent it. That’s a very large assumption.

The bottom line is that moral hazard still exists. Here’s what you can do about it:

It’s our main source of power to create the structural changes we need to prevent moral hazards in government.

The financial reform act did nothing about Fannie Mae and Freddie Mac. Yet they were a large part of the problem.

In addition, there’s a tremendous conflict-of-interest between Congresspersons voting on legislation for businesses, industries and other organizations that fund their campaigns.

We need people in office who will stop this moral hazard.

So inform yourself about the issues. Then vote. And get to know your representatives. Tell them your opinions.

Getting out of debt isn’t good enough anymore. Get yourself into a position we call “debt-free plus”:

Put reserves in place so you can pay cash going forward. Then you will never have to rely on debt again unless its advantageous to you.

This is one of Warren Buffett’s secrets – he only invests in businesses he understands. We can learn from the best!

We aren’t necessarily being literal when we say “close to home”. And we also want to advise you to consult with your financial planner to determine if this is best for you.

However, some of the smartest business people we know have taken all their money out of the stock market. And they don’t plan to go back.

They’re putting it in businesses they understand in their own backyard. They’re investing directly so they can control their money better. We hope it leads them, and the entrepreneurs they fund, to BIGG success!

The Great Debate and New Media