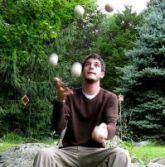 A man died in our next-door neighbor’s front yard a while back. He was forty-two years old.

Another neighbor, who happened to be driving by, saw the man lying on the ground. He approached him and saw that he wasn’t breathing. He called 911.

Firefighters responded first and began to perform CPR. Before long, an ambulance arrived. They tried and tried to get him to respond, but to no avail.

He was riding his bike and apparently had a heart attack. A different neighbor had seen him wandering around but thought he was waiting for the bus. That’s about all we know.

Life is precious. It is a gift.

The Lesson of the Five Balls

So we want to share a life-giving story that we love. It’s a story that’s been told for years. But Bryan Dyson popularized it in his commencement address to the graduating class at Georgia Tech University in 1991. He was the CEO of Coca-Cola Enterprises at that time.

(A similar version of this story was published in Suzanne’s Diary for Nicholas by James Patterson about ten years later. In that version, “integrity” was used instead of “spirit”.)

“Imagine life is a game in which you are juggling five balls: Work, family, health, friends and spirit. You’re keeping all of these in the air and you will soon understand that work is a rubber ball. If you drop it, it’ll bounce back; but the other four balls are made of glass. If you drop one of these, they will be irrevocably scuffed, damaged, or even shattered. They’ll never be the same. You must understand that and strive for the balance in your life.”

Dyson goes on with some suggestions on how to do this:

“Don’t take for granted the things that are closest to your heart, because without them life is meaningless.

Don’t let your life slip through your fingers by living in the past or for the future.

Don’t give up when you still have something to give.

Don’t be afraid to admit that you are less than perfect.

Don’t be afraid to encounter risk.

Don’t run through life so fast that you forget not only where you’ve been but also where you’re going.

Don’t be afraid to learn.

Don’t use time or words carelessly; neither can be retrieved.”

We’ll close with a quote, part of which we’ve seen attributed to Bryan Dyson:

“Life is not a race, but a journey to be savored each step of the way. Yesterday is history. Tomorrow is a mystery. Today is a gift; that is why we call it the present.”

These Forgotten Costs Often Sink Us

How Much Should You Make An Hour?

Top Threats to Your Career and Finances in 2009

Living in the Moment With an Angry Bird

Be a Success Faster

2 Keys to a Much Brighter Future
Scroll to top