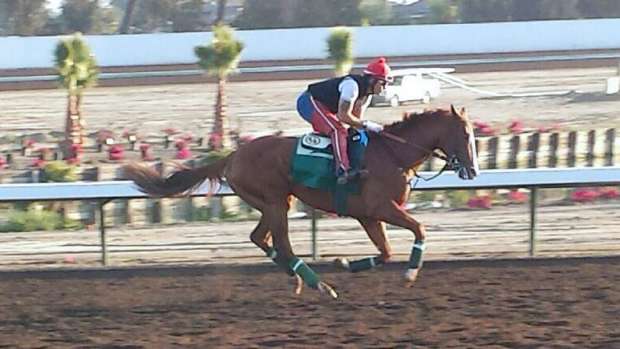 *NOTE: When we wrote this post, California Chrome had just won the Kentucky Derby. He went on to win the Preakness. Now, on June 7th, he’s going for the Triple Crown at the Belmont Stakes. Something that hadn’t been accomplished since 1978!

Two dumbass entrepreneurs turned a $10,000 investment into a $2 million prize. They – Perry Martin and Steve Coburn – are the owners of California Chrome, the horse who won the Kentucky Derby.

Just so you know – these two embrace the dumbass label. In fact, the name of their business is Dumb-Ass Partners!

So in their honor, today we want to share 10 reasons why dumbass entrepreneurs make more money.

Dumbass entrepreneurs know they’ll never have all the answers. Don’t think we’re implying they don’t think. They do. They just know the sooner they act, the faster they’ll learn.

We put this point first because it underpins all the remaining reasons why dumbass entrepreneurs make more money.

Dumbass entrepreneurs often ignore conventional wisdom. They form their own insights, so they’re able to read situations differently than the masses.

3) Dumbass entrepreneurs focus on the downside

The golden thoroughbred’s mother went up for sale. The price was $8,000. Someone quipped “only a dumbass would buy that horse.” (Now you know the source of their business name.)

Martin and Coburn bought Love The Chase. They bred her with Lucky Pulpit. The stud fee was $2,500 – less than any other Derby participant.

Yes, California Chrome is the offspring of unremarkable parents. His mother won only 1 of 6 races while his father was 3 out of 22.

However, the dumbass entrepreneurs didn’t stop with a glance. They dug deeper. They came to believe in the bloodlines. They found connections “into the heart of Kentucky to Claiborne Farm in Paris.”

So you see that this point is an extension of the last one. Dumbass entrepreneurs often gain fresh insights which make the risk acceptable.

In this case, they weren’t putting millions at risk – like a lot of their competitors do. They were only risking $10,000. Dumbass entrepreneurs only take risks they can afford.

We know – this concept is as strange to some as waking up in a barrel…pickled! But these two dumbass entrepreneurs actually care about their horse!

They have a tradition – California Chrome gets Mrs. Pastures cookies the day before and the day after a race. They started feeding him this treat when he was really young.

This is just one example of the special attention they give their prize thoroughbred. Carolyn Coburn – Steve’s wife – said, “…to many people, a horse is a business, but we’ve grown attached to him. He’s part of our family.”

Dumbass entrepreneurs have a secret – they see people, not just customers or employees. So it’s easier for them to sympathize – and even empathize – with the most critical “assets” in their business.

And isn’t it ironic – when you don’t put money first, it often naturally follows.

5) Dumbass entrepreneurs do more with less

The horse racing business has often been called the sport of kings. Apparently, even dumbass entrepreneurs can afford to be kings now.

At least these two can. But they do things differently. While horse owners traditionally spend millions on their horses each year, Martin and Coburn say they spent about $10,000.

We live in a time when money is less important than it used to be – at least for most businesses. Technology is making it possible to do more with less.

Dumbass entrepreneurs find ways to do more with less. They don’t accept the status quo. They don’t do things like everyone else. They look for new ways at the expense of the old ways. It gives them a leg up on their competition.

From the beginning, Martin and Coburn committed to placing their golden horse in the right hands. They looked for people who would care for their horse as much as they did.

They hooked up with horse trainer Art Sherman – an unknown outside of California horse racing circles. He had never won a Kentucky Derby. He hadn’t even been there for over half-a-century.

It didn’t matter to these two dumbass entrepreneurs. He had a reputation for being patient with young horses, giving them individual attention, and learning what he had to so they performed their best.

We’ve witnessed the outcome of this decision – a Kentucky Derby win.

Dumbass entrepreneurs look for partners who share their vision and values. These two forces are behind every great group who accomplish anything BIGG.

In spite of the reputation of their industry, these two dumbass entrepreneurs are not jet-setters. In fact, Coburn still drives a 1988 pickup with over 500,000 miles on it.

A reporter once suggested that a $20 million price tag for Martin’s and Coburn’s four-legged friend. Coburn replied, “For 20 percent, that’s just right. Then I would buy me a new pickup.”

Dumbass entrepreneurs know that the LOVE of money is the root of all evil. But money should be valued – not for what it is, but for what it can do when used wisely.

Both Martin and Coburn still have day jobs. Martin owns a laboratory which tests products like airbags and medical equipment. Coburn runs a company which makes magnetic strips for credit cards, driver’s licenses and hotel keys. He wakes up every day at 4:30 to run the press.

Sure, they could put it all on a horse. But dumbass entrepreneurs have an abundance of horse sense. Multiple streams of income not only reduce your risk, they also give you more options with each thing you do. For example…

Following a win in the San Felipe Stakes – California Chrome’s third in a row – Martin and Coburn were offered $6 million for the horse. Two hours later, they received a second $6 million offer – for 51% of the horse!

A sale would have required them to change trainers. They didn’t say “No.” They said “Hell no.”

They focus on building a great brand. It’s funny – this makes the business even more attractive.

10) Dumbass entrepreneurs believe in the dream

Martin and Coburn were BIGG dreamers right out-of-the-gate. Before California Chrome ran his first race, they sent Sherman a plan entitled “Road to the Derby.”

Here’s Coburn’s advice for other dumbass entrepreneurs with a dream: “If you’re willing to ride the dream out, they will come true for you. We’re living proof of it.”

As it turns out, these two dumbass entrepreneurs are pretty smart. Do you agree?