They sat at a table together, outside the coffee shop. She sat with her back to the window. He sat in the seat next to her, on one side of the table.

She loved this place, right in the center of the city. A circle led cars around a large monument to heroes of the past.

So many people. So much activity. She couldn’t take it all in. But she sure was going to try.

He surfed the internet. She sipped her coffee and looked around, waiting for a moment to talk to him.

The sun was setting. The sky was a beautiful combination of colors that no artist could ever quite capture.

He texted a friend. She took in the view, hoping to never forget it.

She noticed a horse-drawn carriage stop in front of the monument. A young man jumped out, turned to the carriage, and extended his hand to the young lady still on board. They walked hand in hand up the steps to the monument.

They stopped right in front of the monument. The young man stepped behind the young woman. He turned her around, her back now to the monument.

He dropped to one knee and pulled a small box out of his pocket. A huge smile formed on the young lady’s face. He stood up and they embraced excitedly.

They walked, arm in arm, toward the couple sitting at the table.

She smiled as they passed, thinking back to the days when her husband was more attentive.

He never looked up. He was too busy playing a game.

She saw them coming. She leaned forward in her chair, coffee cup in hand.

He was too involved in the game to see anything coming.

The cat ran under the table, exiting under his chair. The dog followed right behind. In full stride, the dog hit one of the legs of the table.

Coffee spilled all over her husband. He dropped his phone and jumped up. It looked like he had wet himself.

He went to clean himself up. She took a sip of coffee and went back to living in the moment.

Shhhh! You have to read this quietly. We’re at the library!

We’ve been thinking about fun, yet inexpensive, things to do. So today we took a little … make that bigg … trip to our local library.

We’re in Champaign-Urbana, Illinois. Champaign’s brand new library is a state-of-the art facility. As we walked in the door, the first thing we noticed, that is different from the libraries of yore, is there’s a coffee shop! Remember the old “No food or beverages” signs. Not in this library! One thing that’s still the same – it’s a cool place to stay cool on a hot summer’s day. But don’t look for the card catalog! You won’t find one … everything’s on computer now. They also have flat screen TVs, Wi-Fi, and other modern technology.

What  did we check out?

While we were there, we checked out a few things – two audio books … Brian Tracy’s Goals and The Long Tail by Chris Anderson with Wired magazine … and Janet Switzer’s book Instant Income.

The price? FREE. It’s paid for by our property taxes.

They have tons of DVDs for FREE. Even the ones that are rentals are only $1 for a week. Right now, with so many of us looking for ways to save money, the library is a great place to go for cheap entertainment!

We’ve decided that we’re going to make it our “office away from the office”! It’s a great place to go for a change of scenery!

We also found some real characters at the library. By observing them, we compiled a list of six things you should NOT do at the library:

#6 – While pointing to a very simple word like “the”, ask the person next to you if he or she can pronounce it for you.

#5 – Put down your book, then lean over and start reading the book of the person sitting next to you. When he or she looks at you, quickly pick up your book and act like you're reading it.

#3 – Flip the page loudly every two seconds or so.

#2 – Announce the page number loudly each time you turn a page.

And the #1 thing you should not do at the library …

Break the silence with the noise from a bodily function … you know the one. Then say, "Wow! That was a good one!" 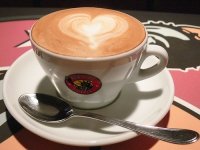 Recently, I was privileged to be in a local coffee shop when I saw one of these little acts of kindness. The man in front of me in line was pleasantly surprised that his latte had been paid for by the last customer. She wasn't even in the store any longer at this point, but it sure made that man's day. Maybe you have seen this or even done this yourself?

What I think is so great about the pay it forward idea is that you make it a double. You not only make someone's day with a little surprise, you make your own day, because, let's face it, we feel great about ourselves when we help others. And in the case of the coffee shop, that woman made it a triple—and beyond, because my spirits were lifted, and now I'm even sharing that good news with you.

So, take a minute next time you think of it and pay the next car's toll, or just get someone's coffee. It's a pick-me- and pick-YOU-up! And what better way to feel successful than to create little moments of success for yourself and others.