Tag Archive for: man to man 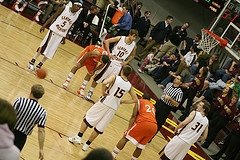 Here in the United States, March Madness is winding down. The Final Four NCAA basketball teams will play tomorrow with the winners meeting Monday for the championship.

That got us thinking about how great coaches build winning teams. So we decided to compare the style of two of the greatest – Bobby Knight and John Wooden.

Bobby Knight spent most of his career at Indiana and recently retired from Texas Tech. He won more games than any other coach in the history of college basketball. He also made more NCAA tournament appearances than anyone else. He won three championships (tied for third) and was selected the coach of the year four times.

John Wooden, the Wizard of Westwood, spent most of his career at UCLA. While there he won a record ten championships, including an amazing seven in a row. He holds the record for most games won in a row (88) and most undefeated seasons (4).

Bobby Knight’s way – Build your playbook and recruit the best talent for it.
Bobby Knight was known for his “motion offense” and aggressive man-to-man defense. Knight only recruited players that fit his model. He had a system; his players had to mold themselves to it. This is the most common way to build your team.

Design your playbook. Determine the duties of each position and recruit people to fill it. Then hold them accountable.

John Wooden’s way – Find the best talent and build your playbook around them.
Wooden played the game based on who he had. Some years, that meant great guards; at other times, he built around a big man in the middle. Sometimes he played man-to-man; sometimes he played zone – it all depended on his players.

This isn’t as commonly practiced in business as Knight’s strategy. In basketball, you have seasons. In business, you don’t. But you do have phases.

In each phase, you’re trying to accomplish certain things so you can move on to the next phase. That’s where Wooden’s strategy works – think about what you need to accomplish in this phase and who would best help you accomplish it. Then go get your players!

#5 – Your players stayed up too late catching the midnight showing of "Horton Hears a Who."

#4 – Your coach went a little too far with the motivational tools he picked up at Guantanamo Bay.

#3 – Your team was too pre-occupied with midterms and grad school applications to focus on silly things like sports.

#2 – They did the right thing by losing and thus avoiding the inevitable riots and on-campus arson incidents that happen when teams win the national championship.

#1 – At least by losing, they can finally get those cheerleaders and the pep band to shut the heck up.

Our bigg quote today is by Jean-Claude Kelly:

“The best and fastest way to learn a sport is to watch and imitate a champion.”

So learn from these champions to build your winning team.

Next time, we’ll discuss a key component that gets people to buy into your personal brand. Until then, here’s to your bigg success!

4 Pointers for Praising Your People