If you’re looking for some timeless advice on the pursuit of wealth, and you love a good story, The Richest Man in Babylon is for you. It’s both inexpensive and a very quick read – but the advice is priceless.

This book may have produced more millionaires than any other book in history. It’s a must-have for your library. Read it again and again. Apply its principles and you, too, will become rich.

You can earn a good living and end up with nothing. This book will tell you how to make your money work for you – step by step.

George S. Clason, its author, tells the story of Arkad, who was famous for his wealth and generosity. In fact, Arkad was the richest man in Babylon. He recounts how he learned the secrets of accumulating great wealth.

When the amazing secret to accumulating great wealth was revealed to him, Arkad was working as a scribe in the hall of records. He struck a deal with Algamish, the money lender, who possessed great riches.

One day, Arkad was approached by Algamish, who needed a copy of a certain law carved onto a tablet by the next morning. Arkad agreed to do it, if Algamish would share his secret to accumulating riches.

How to acquire money
Arkad worked all night to finish the task. The next morning, Arkad delivered the stone to Algamish. And Algamish fulfilled his part of the bargain. He told Arkad the first secret to accumulate great wealth …

“A part of all you earn is yours to keep.”

Arkad couldn’t believe he had toiled all night for such simple advice. Surely, there was more to it than that. He questioned Algamish, who demonstrated that Arkad didn’t understand the power of this statement – Algamish’s great fortune started with this basic law.

Arkad decided to try it. Despite temptations, he succeeded in setting aside a part of everything he earned. He was surprised that he didn’t really notice a difference in his spending, because he set the money aside first.

How to keep money
Algamish returned a year later to continue coaching Arkad. Algamish asked Arkad what he had done with his money. Arkad told Algamish that the money was with the bricklayer. He was on a trip to buy jewels. Algamish told Arkad that his money was gone – if he wanted to buy jewels, he should have given his money to the jeweler. That’s how you keep money …

“He who takes advice about his savings from one who is inexperienced in
such matters, shall pay with his savings for proving the falsity of their opinions.”

He encouraged Arkad to try again, only this time to only trust an expert with the savings. With that, Algamish left.

How to use money
Algamish returned a year later and, once again, asked Arkad to report on his progress. Arkad was a good student. He had saved money once again. This time, he turned it over to an expert. He made money on his money. And he celebrated – with a great feast.

“First get thee an army of golden slaves and then
many a rich banquet may you enjoy without regret.”

Arkad took these lessons to heart and became the richest man in Babylon. First you have to save money. Then invest it wisely. Finally, invest the returns from your investments until you have more money than you need. Now you can feast!

All that great advice and we’re only up to Chapter 2! There’s so much more to this book. We’ve only briefly outlined the great advice to this point. It’s full of great stories with timeless lessons.

That’s why we highly recommend that you read this book. If you’ve read it already, we suggest that you read it again. Keep the principles of this book in front of you throughout the coming year and you, too, will enjoy a rich life!

Does It Pay To Be Smart?

How the Rich Make Money

Want to be a Millionaire? Here’s How to Think Like One 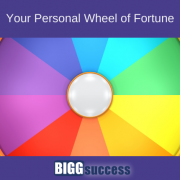 Your Personal Wheel of Fortune

Can You Be Rich Without Earning It?

Don't Shy Away From Networking

The Magical Word That Helps Balance Your Life
Scroll to top