There are experts on everything these days. Just ask Elisabeth Squires, who’s also known as “The Boob Lady”. That’s because she’s the author of the book – bOObs: A Guide to Your Girls – which was released last October.

Since then, she’s been very busy. She was featured on Good Morning America. She’s gone on tour to promote her book. And she’s sold nearly 10,000 copies!

And made a lot of bosom buddies in the process!

That’s her favorite part – meeting all the girls and women, and helping them learn to appreciate their bodies so they have more self-esteem.

Elisabeth can talk about that now, but it took a journey to get there.

She spent the last twenty years raising her three children with her husband. In her spare time, she served as a volunteer for the arts and her kid’s schools.

As a woman who has gone from being a 34DD in high school to a 36EEE with pregnancy, she understands the change that women experience.

A few years ago, she elected to have a breast lift to align her breasts with her petite frame. For the first time, she felt comfortable with her proportions. She’s a 34C now.

And one more part of her journey – she helped her mother survive breast cancer.

All of this led to her defining moment.

She was taking a creative-writing class. One assignment helped her come to grips with why her breast lift made such a difference to her.

Her piece was a hit! She decided to write a book of “mammoirs”. She would relay women’s’ stories about their breasts.

She started researching her subject. She bought mounds of books. She talked to anyone and everyone who had anything to do with breasts – oncologists, lingerie shop owners, plastic surgeons, bra fitters, and every woman, young or old, who would share her story.

What she learned from her research is that the world didn’t need her book!

There were already plenty of resources available that essentially did what she had planned to do. Her breast work would be an “owner’s manual” – think of it as “Boobs for Dummies”!

It would be a one-stop resource for girls and women. Full of practical advice to help them understand themselves and their bodies.

She was excited about her project. But it was hard work! She pressed on. Halfway through, she realized she would make it – she would become The Boob Lady!

Seattle P-I
'The Boob Lady': She's on a mission to create the breast 'owner's manual'
By Athima Chansanchai 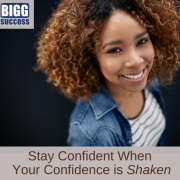 Stay Confident When Your Confidence is Shaken

Help – My Spouse Spends Too Much!

A Super Bowl Champ Lays it on the Line Part 2

Does This Date Work For You?

How To Become A Millionaire
Scroll to top