A recent episode of Survivor inspired today’s show. In case you’re not familiar with the show, there are two tribes in the competition. One of the tribes, the Malakal tribe, won a couple of chickens in a reward competition. Since food is scarce, the eggs from these chickens are extremely valuable. But the chickens themselves also obviously would provide a much needed feast.

#1 – Playing less risky
With March Madness winding down here in the States, we had to include an example that applies to sports and to business.

You’ll see a team get momentum. Then they relax, get less aggressive, start playing to NOT lose, and stop taking risks that gave them the momentum.

They choke their chicken! Then they don’t get any more eggs.

When you get momentum, keep pushing in order to win.

#2 – Not acting out
There are certain activities that make us successful. Let’s look at sales people for an example. They may send out e-mails or letters, make phone calls to existing clients and prospects, attend networking events, and work their contacts.

At first, they’re hungry. They need the sale. As time goes by, they start achieving a level of success. Then they get content, lackadaisical, perhaps even arrogant or cocky. They stop doing the very things that made them a success.

They choke their chicken! Now they don’t get any eggs.

When you start achieving some level of success, build upon the thing that made you successful in the first place so you get to the next level, rather than taking a step backward.

#3 – Money matters
A person saves money (chicken). That money makes money (eggs). They start seeing their savings grow. Then they get tempted …

They choke their chicken!

They’re doing so well that they think the chicken doesn’t matter. But now they don’t have a chicken. So they don’t get any eggs. They’ve spent their savings so it doesn’t earn any interest.

If you want to build a nest egg, don’t touch your principal and keep reinvesting your money. When you do that, your money makes money so you’ll eventually be free to spend your time however you want.

Our bigg quote today is an Ashanti proverb:

“One cannot both feast and become rich.”

So don’t choke your chicken until you don’t need any more eggs!

Next time, we’ll discuss how to relax during a job interview. Until then, here’s to your bigg success!

Take It to the Next Level in Your Career 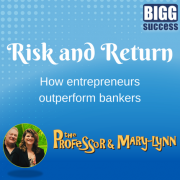 Creating Wealth in the Next Generation Economy

Believe in What You Sell to Succeed in Sales

The Go-Giver
Scroll to top