Beloit College recently published their eleventh annual Mindset List about this year’s crop of incoming freshmen. Check it out to understand the perspective of the Class of 2012.

For example, Jay Leno has always been the host of The Tonight Show for this group. Bring up Johnny Carson only if you’re prepared to explain who he was!

We have a friend who thinks they lack social skills. He believes they’re so busy texting that they’ve never developed the ability to communication personally.

We disagree – we think they’re very social. A generation before, we e-mailed or called someone on their cell phone instead of texting. In our mind, the only difference is the medium used.

We wanted to dig a little deeper to fully understand the perceptions of young people in their late teens and early twenties. After all, they’re the ones who will be coming to us for employment in the near future.

The Media Center at the American Press Institute calls this group of people the “Content Generation” – they use text, videos, and photos (often generated from their cell phones) to connect and inform.

They have witnessed September 11, corporate scandals, mass layoffs, sweat shops, the burst of the dot.com bubble, and now the subprime mortgage crisis.

When they think of the future, they realize that they will have to fund their own retirement while they start and raise a family. Since their parents are older than previous generations, they will also likely have to care for them at some point in their lives.

The workplace for the next generation

All of these things impact the jobs they will choose. They don’t expect to stay at the same company for their entire career. They won’t necessarily take the job that pays the most either – they’re looking for more than money.

This generation grew up with Tom Peters and the idea of Me, Inc. They understand personal branding and seek lifelong employability. So two of the most important components of a good job are:

They want to work for people in a company that truly values its employees. These people live the values they talk about. They follow through on what they say. They’re authentic.

For example, if you say you’re “green”, you better be green. You recycle. You use energy-efficient light bulbs. You work to reduce paper use. And that’s just the start!

We admire them because they’ve figured out some important things already that we didn’t have worked out at their age. They have a lot of potential. Time will tell if they live up to it.

Next time, with the Democratic Convention wrapping up, we’ll talk about donkeys. Until then, here’s to your bigg success! 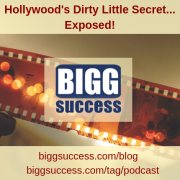 The High Cost of Instant Success

Track Your Time with this Popular Toy