We try not to make financial decisions in a vacuum. We strive to factor in all the relevant pieces before making a major purchase. But there are some costs that we often fail to factor in that can make a significant difference.

We often fail to factor in future flows of money.

We expect a certain percentage pay raise. So we spend money as if it has already happened. It’s especially important in times like these that we don’t spend money before we know we have it.

Another thing we often do is count on a bonus. If it doesn’t materialize, we’re in trouble as we learned from Clark Griswold in Christmas Vacation. We sure don’t want our brother tying up our boss!

What about increased insurance costs? Is it likely that you’ll pay more for health insurance next year? How about insurance for your house or car? Insurance costs can rise significantly from year to year.

Have you thought about what might happen with recurring expenses? Cable bills, power bills, and water bills all seem to rise from year to year.

You may finance a major purchase. Sure it’s only $100 a month. You can cover it now. But if it stretches your budget to its limit, it’s likely you won’t be able to cover it next year. You’ll start sinking and soon end up underwater, in a financial sense. You’ll run out of money before you run out of month!

It’s important to have a safety net – spending less than what you make each month.

A tool businesses use

We often don’t think about it this way, but we all run an organization – our households. Just like any organization, we have inflows and outflows of money.

Reasonably sophisticated business people work from a budget. Yes, the “b” word. Many people do treat budgets like a dirty word. But they’re a great tool.

And they’re especially important if you don’t have any money left over at the end of the month. It’s important to understand why. You can use Quicken, Excel or any number of ways to create your budget.

Many business people don’t just budget for one year. They look at projections over three years or more. These budgets don’t have to be elaborate – just plot out your main sources of inflows and outflows.

The power of the tool

Once you have a budget set up, you can look at “what if” scenarios. For example, what if:

When you create a budget, you’re applying Stephen Covey’s “begin with the end in mind” and “put first things first” (from The 7 Habits of Highly Effective People) to your finances. You’re considering all your costs – both now and in the future. Then you can see the impact of major purchases on your overall finances so you make the best decision going forward.

You can run your finances intentionally, rather than ad hoc. You can prepare for contingencies so you survive no matter what. Then you can shift your focus to thriving!

Thanks for stopping by today. Next time, we’ll discuss how assumptions we make about time leave us overextended. Until then, here’s to your bigg success!

Find Your Intersection to Stand Out

Left Brain or Right Brain – Which Do You Use More? 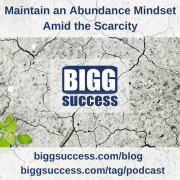 Maintain an Abundance Mindset Amid the Scarcity

Dealing With The Loss Of A Job

Future Shock! Why You Over-commit
Scroll to top