“Don’t live by old sayings that don’t apply to you. For instance – ‘Have a Plan B.’ Having a Plan B means you believe that Plan A might fail. Having a Plan B requires that you put time and energy into what you could’ve been doing for Plan A to make it work. And if Plan A doesn’t work, guess what, get a new Plan A.”

There’s some real wisdom in his quote. We’ll look at it line by line:

“Having a Plan B means you believe that Plan A might fail.”

Throw away the security blanket

There’s another thing that comes to light with this quote. Think Linus van Pelt, Charlie Brown’s best friend and Lucy’s younger brother. He never went anywhere without his security blanket.

We can’t succeed if we hold on to our security blanket, or blankets, as the case may be. We have to throw it away once and for all if we’re going to succeed bigg.

A lot of times we hold on tightly to that security blanket just in case. Just in case, things don’t go as planned.

Well, here’s the brutal truth – no matter how good we get at planning, things never will go as planned.

That’s when we have to hunker done. We have to double our efforts to make our plan work. We have to overcome all the obstacles that we will face and keep the faith.

The covenant with Nature

We must keep on believing that we will succeed because we have no choice but to succeed. When we reach that level of resolve, the forces of Nature begin to conspire with us, instead of against us.

It’s not a miracle. It happens too frequently to think of it that way.

It is no accident. Because that implies a randomness that doesn’t exist.

It’s isn’t luck because it happens more often to people whose thoughts lead to certain behaviors. The more determination we have, the luckier we get!

It’s more like a covenant. Nature says, “This is how much you have to believe. Here is what you have to let go of in order to have my blessing.”

Now, let’s look at the next line …

“Having a Plan B requires that you put time and energy into
what you could’ve been doing for Plan A to make it work.”

Since we only have a certain amount of time, we can’t afford to waste it if we’re going to succeed bigg.  It’s all about priorities.

We tend to think that:

The bare naked truth is … all of that is a lie!

We do have to determine what is most important right now in pursuit of that bigg success of which we dream. Then we have to focus all our energy on only that.

In the last part of his quote, he says,

So the question is, how do you know if Plan A isn’t working?

One way to judge it is if you keep running into the same wall over and over again.

You’ve tried to climb over it.

You’ve tried to go around it on one side.

Then you tried the other side.

You tried to dig under it.

You even tried to blast through it.

It may be time to start thinking of your alternatives. And here’s where we deviate slightly from Steve Harvey. Because we think Plan B is like Step 2 on your path to bigg success. You have to have a clear picture of what bigg success looks like to you before you start. Then you need to map out the steps to get there.

With your plan in place, you’ll focus all your time and energy on Step 1 before you begin to take the second step. So we’ve thought about it before we start, but we don’t worry about it until it’s time.

We think Plan B is just like that. Before we start working on Plan A, we should have thought about Plan B. We’ve prepared for the contingencies. But that’s where we stop.

And the important distinction is this ….

Plan B doesn’t send us back where we were before. Plan B moves us ahead in a way that Plan A didn’t. It makes that wall insignificant.

The only path to bigg success

But it doesn’t pay to spend too much time thinking about Plan B because the wall we face probably won’t be the wall we expect. So now we’re back on track with Steve Harvey.

Think about it a little, but don’t dwell on it. While you’re pursuing Plan A, keep Plan B out of your head. Because you have to if you want to succeed bigg.

Your mindset has to be, “This is my only path to bigg success.” By thinking that way, you will find bigg success.

Thank you for checking in with us today. Join us next time as we begin a two-part series on the ten early warnings of a business in trouble. Until then, here’s to your bigg success! 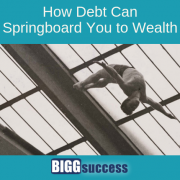 How Debt Can Springboard You to Wealth

The Deal of Your Lifetime