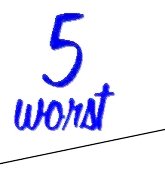 As we were thinking about the annual ritual of New Year’s Resolutions, we started talking about traps we fall into that waste time and money.

This list of the 5 of the worst reasons to do anything came from that conversation.

“It’s what I’ve always done”
It’s inertia – an object in motion stays in motion – that dictates a lot of what we do. It’s easy to just keep doing the same old thing.
But you have to ask yourself: “Is it getting me where I want to go?” If not, why keep doing it?

“Everybody’s doing it”
At least, that’s what we tell ourselves. The reality is that everybody doesn’t do anything except breathe, sleep, eat and die!

There will always the hot new thing. For us adults, peer pressure is usually mostly self-imposed.

This one’s a little like the first one. If it’s counterproductive to your bigg success, then don’t keep doing something just because it’s expected of you.

Have a conversation. Delegate it. Eliminate it. Do something – anything – to stop wasting your time. Sacrifice the sacred cow and move on!

Bigg success is life on your own terms. If you need more money to live that life, then by all means go for it.

However, there’s a problem with doing something just for the money. Usually when someone sees nothing but dollar signs, the dollars don’t materialize. Your judgment can get clouded. You don’t weigh out the market realities.

It’s better to focus on doing things that are mutually beneficial. Find a problem you can solve that provides you with a decent return on your investment of time and money. That’s where you’ll find bigg success!

Thanks so much for checking in with us today. Please join us next time when we’ll talk about a condition that keeps people from keeping their New Year’s Resolutions. Until then, here’s to your bigg success!

You and Your Drum