You know the saying, “If at first you don’t succeed, try, try again.”

We heard it when we were kids. We said it out loud. Over and over again.

The problem with the saying is that it implies more of the same.
More effort.
More willpower.
More everything.
More. More. More.

Then you’ll succeed.
Unless you don’t.
The solution? Try, try again.

We see two additional problems with this simple saying:

It skips a step

If at first you don’t succeed, don’t try again until you understand why. It’s best to learn the inherent lessons of failure before you charge ahead again.

Take time to diagnose before you pile on with more of the same. Because more of the same may just lead to more discouragement, more unsatisfactory results, and more wasted time and/or money.

It misdirects the next step

Once you’ve fully diagnosed the situation, you can move to the prescription.

You may try again. Or you may not.

That’s the important distinction that this saying fails to make:
You may have discovered that you shouldn’t try again.
You may learn that you should stop trying this so you can try something else.

If you’re hitting your head up against a wall over and over again, something needs to change. And it’s pretty obvious the wall isn’t moving.

The only realistic expectation from ramming your head into the wall again and again is brain damage!

BIGG success is life on your own terms. The most important term in this saying is:

Try and learn. Then try again. Or stop and do something else. Don’t quit. Adapt. It leads to BIGG success!

5 Maneuvers for Entrepreneurs to Ride the Waves to BIGG Success 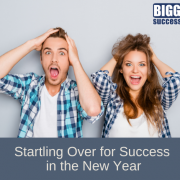 Startling Over for Success in the New Year

From Idea to Success
Scroll to top