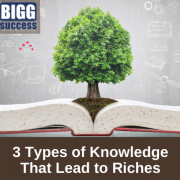 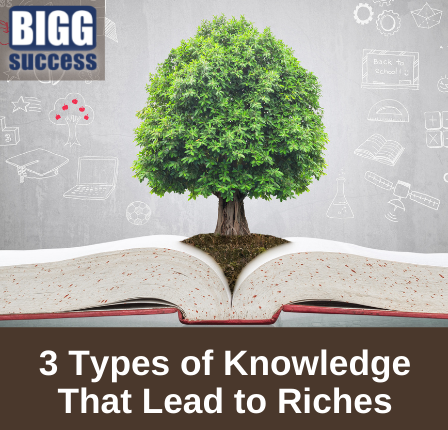 We discovered a nugget of wisdom that points to the 3 types of knowledge that leads to riches. It’s something we hadn’t noticed before and haven’t seen anyone else share…

In his great book “Think and Grow Rich”, Napoleon Hill tells us the root word of the term “educate”. It comes from the Latin word “educo”, which means…

END_OF_DOCUMENT_TOKEN_TO_BE_REPLACED

Bigg Success is life on your own terms. There’s an old negotiating rule:

You get the set the price or the terms, but you don’t get to do both. So if you choose the terms of your life, bigg success will set the price.

We were talking about Picasso recently. We don’t talk about a painting by Picasso; we talk about “a Picasso”. His name is branded with his work. d do it.

But Picasso paid a price for his bigg success. It didn’t happen overnight. It took years for Picasso to become … Picasso.

He started at the age of seven. His father was an art professor, so he had a mentor from a very early age.

In his adult years, he was so poor, at times, that he burned his own paintings to heat his living space. Now that’s expensive energy!

No matter what obstacles he faced, he kept painting. Painting was his obsession.

He was admitted to a top school of art, but dropped out. Formal education wasn’t his thing. He was determined to live his life on his own terms. In fact, he often argued with his father over his paintings.

He didn’t always listen to his mother either. He said:

"When I was a child, my mother said to me, 'If you become a soldier, you'll be a general. If you become a monk you'll end up as the pope.' Instead I became a painter and wound up as Picasso."

There have been lots of generals over the years. We’re on our 265th Pope. But there’s only ever been, and ever will be, one Picasso.

And there’s only, and ever will be only, one you!

Picasso had a different dream for himself than his mother had for him. He had a bigger vision. He was unique and he sought to prove it.

What would have happened if Picasso didn’t dream so bigg?

Would he have been a general who doodles? Fortunately, we’ll never know.

But we do know that we would have never known Picasso. The world would have missed out on his great talents.

What is your voice telling you?

Please share that, if you want, by leaving a comment below, calling us at 877.988.BIGG(2444) or e-mailing us at bigginfo@biggsuccess.com.

Our source for much of the information about Picasso, along with the image we used in today's post was Wikipedia.