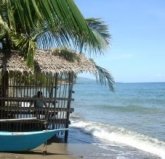 Jon Swanson, aka The Social Media Chaplain, recently had a couple of posts (titled Focus and Away) that really got us thinking. Thanks to Chris Brogan for introducing us to Jon.

No intent to convert here but just a warning – if you’re offended by the mention of Jesus (oops, that means we just offended you), you’re going to be offended (more)! Otherwise, continue reading.

Jon tells about a time when Jesus had been up all night healing people.

As dawn arrived, he walked away. He went to a secluded place.

But people came looking for him. They pressed him to continue his good work.

You have a reason for being. It’s your purpose.

You are meant to do something BIGG. It’s your destiny.

But there’s a magical word for keeping your life in balance – No! You must learn to use regularly if you’re going to fulfill your purpose.

It’s what Jesus did in this case. You will be well served to follow his example.

You’re human. You need to rest. Even Jesus needed to rest.

Sleep – it’s what we sacrifice to maintain work-life balance. Or at least some semblance of it.

You quit for the day physically before you quit mentally. So in order to get a good night’s sleep, you need to spend some time decompressing.

Most of us work hard and long these days. You need to rest now and then. You have to know when to say when.

Jesus demonstrated this in this example. Sometimes you just have to stop and rest.

Just make sure you don’t fall into the trap with your free time. We often think craving seclusion is bad.

Being reclusive is a negative. It’s a sign of deep problems.

Spending time alone now and then is a plus. It will help you refuel and stay on course to your destiny.

Sometimes you just have to get away to be a BIGG success.

How do you know when it’s time to get away?

We often make a mistake when we think of play: When we envision play, we picture others.

Do you do so too?

It’s a trap. You’ll be much happier if you reserve a portion of your play time just for you.

Not out loud. Unless you’re alone!

You need time to refresh. Physically, of course. But you probably do okay with that one.

You need to make time to refresh your spirit. To feed your soul. And one way to do that is to spend some time alone.

Quietly. With just your thoughts.

To refect. And to dream. To envision BIGG success.

To live out in your mind what you will live out in real life. Because every victory is first won in the recesses of your mind.

Now, we know that this is a scary proposition to some people. But give it try.

In time, you will grow to appreciate this time. To treasure it, even.

Go someplace that inspires you. Get out in nature, if that’s your thing. We like to be near water.

It’s okay to be around other people. Just try to find a place where they’re not likely to be people you know.

Make time for you. Time to converse, to refresh, to dream. It leads to BIGG success!

Do you make time for yourself?

We recently ran across a study by the University of Warwick. We found it interesting that their results fly in the face of a long-held assumption.

For years, it’s been assumed that people get healthier after a promotion. Researchers postulated that people who get promoted feel more in control of their lives. They also thought these people may feel better about themselves.

But the researchers at the University of Warwick found that this wasn’t the case. In fact, they showed that people who get promoted have ten percent more mental strain on average.

It makes sense, doesn’t it? A promotion often comes with increased responsibilities, increased hours, and perhaps more people to supervise.

It can place a tremendous amount of pressure on our free time. The researchers at the University of Warwick cited this time pressure as a reason that people were twenty percent less likely to go to the doctor after a promotion.

But as you know if you’re a regular reader, bigg success is life on your own terms. You have to decide if a move up is consistent with how you define bigg success. Nothing else matters.

There’s more than one way to move up. One person may choose to move into management. Another one masters a craft and becomes known for it. That’s moving up too!

You may want to move up, but now is not the right time. When you think of life on your own terms, think of “terms” as phases of your life. You may have kids at home and want less responsibility right now. That’s a great reason to postpone a promotion.

When the kids go to school full-time, the time may be right. You’re breaking life on your own terms down by the terms of your life.

A framework for decision-making

Money – You’ll presumably have more if you accept the promotion.

Time – You have the same amount no matter what. But most likely, you’ll have less time away from work.

Growth – Even though their sport seems like it requires mostly physical abilities, top athletes understand how important their mental condition is. We must understand that we need to look out for our health as well as our mental abilities. Besides that, a promotion may allow for a lot of personal growth or it may detract from the personal growth you really want.

Work – You may find your work more, or less, fulfilling. It depends on your goals.

Play – You’ll likely have more money to spend on leisure but less time to enjoy it.

We’ve also said that the bigg idea behind bigg success is to find synergy. You may realize that the real secret to making this promotion work is to learn to delegate effectively. That’s growth – one of five elements.

You may find that you can accept the promotion, move up at work, and make more money without sacrificing time for play. It may even involve a little more time initially while you develop your delegations skills, but you know it’s worth it because of all the long-term benefits.

Look for synergy in the five elements as you consider opportunities for even bigger success!

So what if you decide a promotion isn’t for you? Please join us next time when we talk about how to turn it down.