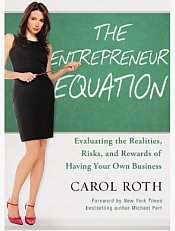 We were so happy today to visit with Carol Roth on our show. Among many other things, Carol’s an investment banker, business strategist and deal maker who has helped clients from solopreneurs to multinational companies raise more than $1billion of capital.

You may have seen her on Fox News, MSNBC or Fox Business. She has her own TV show in development and she’s the author of the fantastic new book, The Entrepreneur Equation, which is why we want you to meet her.

Listen to the podcast to hear:

Carol has some incredible special offers if you pre-order her book by February 18, 2011. We highly recommend it to you!

To listen to Parts 2 and 3 of our interview with Carol Roth, click here.

By now, we all know Ted Williams – the homeless man with the golden voice. His video went viral in hours.

The media jumped all over him. Within days, he was on The Today Show. Within a week, he had appeared on The Early Show, Jimmy Fallon, Dr. Phil and Entertainment Tonight. He had job offers from MSNBC, the Cleveland Cavaliers and Kraft. It was even reported that Jack Nicholson had personally called offering a role in an upcoming movie.

Unfortunately, personal issues rose to the surface just as quickly. Ted’s star burned bright. But it fell as quickly as it came to light.

We hope we see him in the spotlight again – when he’s ready for it.

Fame and fortune should be by-products
Many people believe that fame and fortune are the answer. They aren’t. They may be a by-product of BIGG success. However, they won’t – in and of themselves – lead to fulfillment.

They aren’t the end, either. In fact, many studies have shown they’re barely the means for achieving happiness. Fame and fortune are goals that are empty.

What would you do with your fame and fortune? When you know the answer to that question, you’re a step closer to being ready for it.

Natural talent is a small part of the equation
Ted definitely has a talent. He was discovered with a sign that said, “I have a God-given gift of voice.”

Have you discovered your gift? Are you investing time to master it?

BIGG success comes for a price
BIGG success is life on your own terms. There’s a principle of negotiation – you get to set the price or the terms, but not both. That is, unless you’re negotiating with a fool. And BIGG success is no fool!

If you set the terms for your life, BIGG success sets the price. You have to be prepared to pay it or you’ll never reach BIGG success.

As a society, we seem to have bought into the fallacy of instant success. Kids dream of being stars. Adults play the lottery while dreaming of how they would spend the money. Yet most people who win the lottery end up in worse financial shape within years.

We think shows like American Idol demonstrate instant success. But they don’t – do you ever see a contestant who gets deep into the competition without years of training?

The internet does occasionally produce instant stars – like it did with Ted. Unfortunately, as has been demonstrated in this case, BIGG success demands a price even if you are an instant success.

And the price is usually a lot higher when fame and fortune come quickly. So if you’re struggling to reach BIGG success, count yourself lucky!

Cinderella stories usually turn out much better in the movies than they do in real life. Prepare, prepare, prepare … so you’re ready for BIGG success!

Just a note: If your heart goes out to people like Ted, check out Invisible People. Mark Horvath is doing some BIGG things bringing light to the plight of our nation’s homeless people.