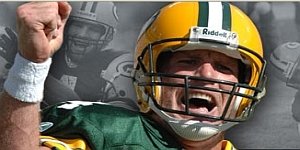 Brett Favre will be remembered as one of the greatest quarterbacks of all time. He holds NFL records for passing yards, completions, touchdown passes, consecutive starts, and career wins. This three-time MVP took his team to two Super Bowls, and won the bigg prize once.

He knows about peak performance.

But as much as we have enjoyed watching him on the field (except when he beat the Bears), we found his press conference fascinating because it revealed an important lesson on peak performance.

Do you have the passion to prepare?
He best summarized his decision to retire, when he said,

“I don’t have the passion to practice and prepare.”

That’s the lesson we can learn from Brett.

We talk about passion quite a bit here at Bigg Success. We don’t always make this important distinction – it’s not about the passion to play the game; it’s the passion to prepare for it that really matters.

Brett mentioned this very thing in the press conference. He said if all you had to do was show up on Sunday, more people would play. He’s absolutely right – and it goes beyond football.

It’s not passion for what you do. It’s passion for the things you have to do to get to do what you want to do. Isn’t that a bigg to-do list?

To discover your passion, envision 11 HOW you would spend your time and money if neither time nor money was an issue]. You have to enjoy the process because playing the game is a small part of it.

Are you having fun as you prepare?
Brett said that on Saturday nights, he was watching tape. On Sunday evenings, just hours after the game, he was already preparing for the next one. He had never done that before.

He wasn’t relaxing and enjoying it. His work was becoming work. He said he worried that it would affect his teammates and his family.

How’s your balance?
If you can’t perform at peak level, and still maintain some balance, it’s probably time to move on. Preparation for peak performance takes time away from other things in your life.

Brett mentioned that he can vividly remember every game, down to individual plays, as far back as high school. But that’s his professional life. He went to say that there are things that have happened outside of football that he doesn’t remember at all. He’s not willing to miss out on them anymore.

We congratulate him on a great career. We thank him for going out with the same style that he played the game and teaching us a lesson in the process! We wish him bigg success as he moves on!

“Look at life through the windshield, not the rear-view mirror.”

Peak performers know how to drive toward their goal – a skill that can be transferred to any field. So find your next destination and next thing you know, you’ll pass everyone on the road!

Next time, we’ll answer a question from one of our listeners who has an idea for a business, but doesn’t know what to do next. Until then, here’s to your bigg success!

Finding The “Good” In Good-Bye

Too Much To Do? Take A Nap!

How Do You Determine the Asking Price for Your House?