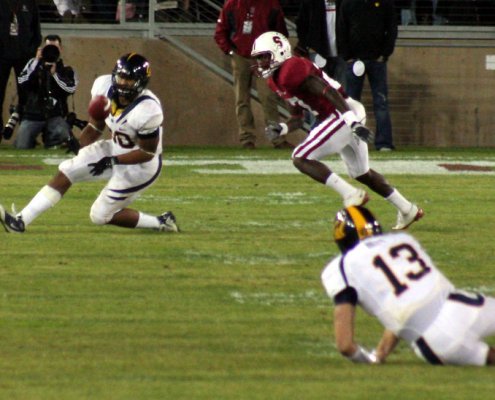 With the Big Game coming up this weekend, we’re thinking about football. We found something interesting about the history of the forward pass. It offers entrepreneurs valuable insights about social media.

From size and strength …
The year was 1905. Football was a low-scoring, violent game. You often heard scores like 7 – 6 or 13 – 12. The offense charged as a single mass into the defense, hoping to gain just a few yards.

Size and strength ruled – the team with the biggest players usually won.

How dangerous was it?

Eighteen players were killed on the gridiron during the 1905 season. The seriously injured numbered 159.

It was so bad that President Theodore Roosevelt called. He said the game either had to be modified or he would take action to make it illegal.

… to speed and skill
Before the 1906 season began, the rules committee met to try to make the game safer. This was the beginning of the NCAA. They made the forward pass legal for the first time.

During the 1906 season, most teams stuck with the status quo. They threw an occasional forward pass – usually only one or two a game.

The forward pass in business today

But neither will do you much good if nobody knows how good you are.

The forward pass is word of mouth. Word of mouth has always been a part of building a business. Now it’s more crucial than ever.

Consumers rely on the forward pass to make their buying decisions. They listen to what people they know say about you and your business.

Entrepreneurs win the game by using social media to get more forward passes. Here’s how:

1. Huddle up with your customers
When’s the last time you really talked with your best customers? Not just a hello. Not to get an order. A real conversation.

Huddle up with your best customers to see how you can serve them better.

Mediocre service is better than inconsistent service. But neither will get you the forward passes you want.

You can’t just satisfy your customers, either. You have to thrill them if you want them to make forward passes on your behalf.

3. Encourage them to play along
We hate seeing players on the field motioning for applause. In our opinion, they should focus on playing the game. The fans will applaud if they play well.

However, in business, you can make it easy for your fans to make forward passes. Make sure you have “social buttons” on your site to make it easy to “like” you on your Facebook Fan Page or follow you on Twitter.

Then engage with them. Don’t stand there asking for their applause. Go out and earn it!

How do you get more forward passes?

From One Job a Week to the Career for Life

Don’t Wait Until the Cougars Get Hungry

Why Entrepreneurs Should Not Be Too Happy

A Bold Career Move May Save Your Life
Scroll to top