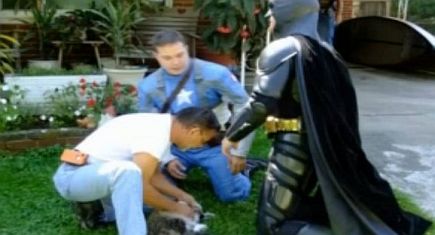 It’s a story that went viral: Batman and Captain America saved a kitten from a burning home. We’ll tell you more about that, plus how this superhero story has some great inspiration for entrepreneurs.

John Buckland, dressed as Batman, and Troy Marcum, dressed as Captain America, were the entertainment at a children’s event in Milton, West Virginia when they noticed smoke coming from a house nearby.

They went into true superhero mode as they rushed to the house to make sure no one was inside. Then Buckland, a former fireman, broke out a window so some smoke could escape. As he looked down, he saw something small and furry on the floor…a kitten! He pulled it out of the burning home. The kitten survived!

How did this former firefighter turned Batman come to be at the right place at the right time to help this cat and its 9, make that 8 lives? John Buckland was a career firefighter for many years before he got the call to serve in Iraq, which he did for two years. When his tour of duty was over, he couldn’t find work in the profession he loved.

He put his entrepreneurial cap on. When he worked for the Fire Service, one of his favorite things about it was teaching classes to children about safety. Children inspired him, and he felt passionate about doing all he could to help them.

An idea was born: Why not have heroes deliver positive messages that show kids how to take on the challenges they’ll face while growing up? Why not provide them with the tools they’ll need to make good choices so they can be heroes in their community? That’s exactly what Heroes 4 Higher does, for parties, school events, and more.

Thank goodness John Buckland had a great name for his business and a website because from countless newswires, newscasts, blogs, and social shares, this story was everywhere! In just a few days, the name of his small business was known around the world!

While most of us will never run to a burning house and save a kitten, you just never know when unexpected publicity will come your way. Is your business ready for that? Will people be able to find you and learn more about your story?

We sure are glad we were able to learn more about John. Not only did he save a kitten, but this entrepreneur’s passion is making our world a better place. What a hero!

With Game 6 of the World Series upon us, we found a fascinating article from Time entitled Sport: A Game of Inches. It’s from July 1957.

It’s about George Robert Tebbetts who gave 53 years of his life to Major League Baseball – first as a player, then a scout and, finally, the manager of the Cincinnati Redlegs (as the Reds were known at that time).

No, it doesn’t have anything to do with the use of his middle finger!

The article says that his aunt observed that he had lips like a bird. Wikipedia says his aunt said he chirped like a bird.

We don’t know which source to believe, but they do both agree that his voice was irritating. According to the article, he got thrown out of a game because, as the umpire said, “I have a splitting headache and that voice of yours just kills me.”

Time awarded him the Manager of the Year honor in 1956 because of the way he had turned around his team. There are all kinds of lessons in this article about baseball, of course, but also about leadership, life and entrepreneuring.

Like his scouting report on a young pitcher, where Birdie said, “Major league stuff and a great arm. Screwy in the head. Eliminate head and I recommend. Get good surgeon.”

But our favorite quote is where the title of the article comes from:

“Baseball is a game of inches … a fellow gets up in the ninth and comes through with a liner between third and short — he's a hero. Two inches the other way and he's a bum because he hit into a double play.”

True in baseball. True in life. True in small business and entrepreneuring.

So here are 5 lessons from baseball about being a hero in business:

A lot of people never take their turn at bat. They have ideas but they never act upon them. They spend so much time preparing that they never get in the game.

Pick your pitch
You won’t be a hero if you swing at every pitch. You’ll strike out before the right one comes along.

Opportunities are all around you. Most of them aren’t worth your time.

There are prospects you could pursue. Pick the right ones for you, your products or services and your company.

There are projects you could initiate. Select the ones that will advance you the furthest toward your goals. Let the rest pass right by.

You can’t make a prospect say “yes.”
You can give your prospect your best pitch.

You can’t force an employer to hire you.
You can give them every reason to put you on their roster.

Heroes know you can’t control results. You can only control your activity. So they focus on the activity and let the results take care of themselves.

You may not be a hero today but you can rest assured you will be a hero soon.

Take away the lessons – from failure and success – to hit a grand slam the next time out! That’s bigg success!

Thanks so much for reading our post today. Please join us next time when we discuss why you should beware of killing your customers with kindness. Until then, here’s to your bigg success!

Steer Your Way to Bigg Success

A Lesson on Crowds from Glee