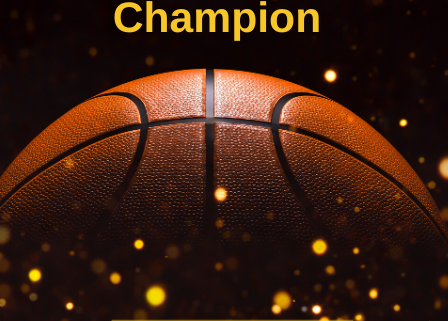 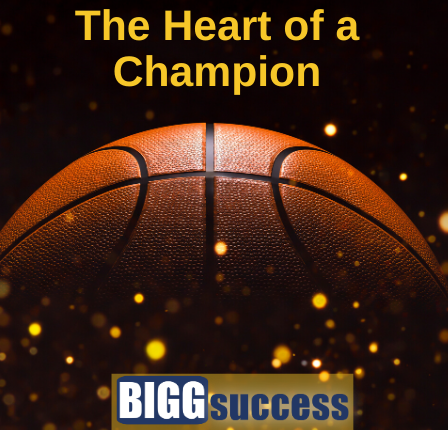 Kobe Bryant had the heart of a champion. We share seven ways this helped him become one of the greatest basketball players ever.

This show is a tribute to Kobe Bryant. It’s our way of saying “Thanks” for inspiring us all to be our best self. A summary of our conversation on this BIGG Success Show podcast follows.

Nothing. Not a free throw. Not a layup. Not a lucky shot that went in.

With his confidence shaken, he says he almost quit the game of basketball. At 12 – before he even became a teenager. Thankfully for all of us basketball fans, he didn’t.

And just six years later, he was the 13th pick in the NBA draft. Straight out of high school, a first-round draft pick. Truly, a rare feat.

1) The heart of a champion inspires another champion

As Kobe considered giving up, he found inspiration in another basketball star. He found a hero, in the form of a champion.

That champion was Michael Jordan, another one of the greatest basketball players of all time. As a freshman in high school, Michael got cut from the team. How did he respond from a defeat much like the one Kobe had experienced? Michael didn’t quit. He just worked harder. Harder than anyone. He had something to prove to his coach.

Inspired by Michael, Kobe decided to use his failure as fuel for his BIGG success. He vowed to outwork everyone. And he did. He became known for his work ethic.

2) A motivating fear of failure

As the two of us prepared for this show, we experienced an “Aha” moment. We’ve talked about the fear of failure before. We’ve said it is the single biggest barrier to success.

Our “Aha” moment came when we realized that all people feel this fear of failure, but they respond to it in entirely different ways.

Most people are afraid of short-term failure. So they rarely get out of their comfort zone. They don’t put themselves “out there”. They’re so afraid to fail that they fail to make important decisions and act accordingly. They get stuck in place! Failure, then, becomes a self-fulfilling prophecy. They fail in the short- and long-term.

Champions are afraid of long-term failure. So they bear the discomfort and stick their neck out. Because they are so afraid to fail, they feel duty-bound to make important decisions and act accordingly. They have to move! Failure is not option. They may fail in the short-term at times, but they will be rewarded for their efforts in the long-term.

3) The heart of a champion works harder

You can’t always control how the ball bounces. But you can fully control how hard you work. And Kobe worked. Like no one in the history of the game, with one exception. Michael Jordan.

There’s no better example of this than when Kobe played on the U.S. Olympic team. Rob, the team’s trainer noticed Kobe’s work ethic on the first day of practice.

Practice was scheduled for 11 a.m. Kobe called Rob at 4:15 a.m. to ask him for help with some conditioning exercises. Rob arrived to the training facility in 20 minutes.

He was struck by Kobe’s appearance: His shirt was soaked with sweat. Kobe had already been training. Nevertheless, he was ready for more.

He and the trainer worked on conditioning for 75 minutes. Then they hit the weights for another 45 minutes. It wasn’t even 7 o’clock in the morning. Rob, exhausted, went back to his room to rest up for practice. Kobe, well…he started practicing his shooting.

Sometimes he practiced without the ball. His Laker teammate, Shaquille O’Neil (Shaq), noted in his book, Shaq Uncut*, “You’d walk in there and he’d be cutting and grunting and motioning like he was dribbling and shooting – except there was no ball. I thought it was weird, but I’m pretty sure it helped them.”

When Rob returned for the 11 a.m. practice, the members of Team USA were rolling in. They were gathered on the sideline talking with each other. The coaches were there too. All alone on the court, Kobe was still shooting hoops.

Rob went over to Kobe and said to Kobe, “Good work this morning. When did you finish?”

“Getting your shots up.”

His teammates were getting ready to start the practice. Kobe already had seven hours in!

So Kobe practiced with his teammates when he was already fatigued. Like he would be in a game.

There’s a lesson in this regimen for those of us who make money through brainpower. Research shows we’re more creative when we’re tired. When we lose focus, we gain possibilities.

Legendary sportscaster Jim Gray interviewed Kobe on his last day as a Laker.

Gray asked: “How do you want to be remembered?”

Kobe replied without hesitation, “As a talented overachiever. I was blessed to have a talent. But I worked as if I had none.”

Count your blessings. Strive as if they didn’t exist.

We like to look at it this way – Everyone has one or more God-given gifts. Everyone can develop talents from their gifts. It takes work to take your gift and develop a talent, as Kobe demonstrates. But in that work, champions are born.

We often credit talent for people’s success. But we fail to see all the time they have invested and all the things they have done, with no fanfare and little attention, to reach the BIGG success we see.

5) The heart of a champion chooses sacrifice

On Kobe Bryant’s Muse, a SHOWTIME special, Kobe emphasized the tremendous sacrifice it takes to be a BIGG success. He said:

You can’t have it all. You can have all you prioritize.

6) The heart of a champion compels you to try, try again

In an interview with GQ, Kobe fired back at people who criticized the way he played:

“I’ve shot too much from the time I was 8 years old. But ‘too much’ is a matter of perspective. Some people thought Mozart had too many notes in his compositions. Let me put it this way: I entertain people who say I shoot too much. I find it very interesting. Going back to Mozart, he responded to critics by saying there were neither too many notes or too few. There were as many as necessary.”

According to the book, The Kobe Code: Eight Principles for Success*, Kobe has a scorer’s mentality. He just keeps shooting, even when the ball isn’t falling for him. He always believes the next shot will go in. And it will be the first of many as he gets a hot hand, which carries his team to victory.

Successful entrepreneurs – the traditional type and people who think like entrepreneurs in their personal lives – are always just one idea away from BIGG success.

Don’t give up! Keep trying!

In the Jim Gray interview with Kobe Bryant that we mentioned earlier, the legendary broadcaster asked the legendary hoopster what he would miss the most.

Kobe replied: “The process, the training, the preparing for games.”

It’s about winning. But it begins with preparing to succeed.

BIGG success is peace of mind. One of the three sources of that peace of mind is “striving daily to reach your full potential.”

That’s what Kobe did. And he succeeded.

Science shows goal-seeking creates more fulfillment than goal-achieving. So love the process, the training, the preparing.

Success is a Journey Full of Stories

Free Food and Fun with Friends

Save Now Without Depriving Yourself

3 Tips to Find an Idea for Your Business

5 Things to Love About Your Business
Scroll to top